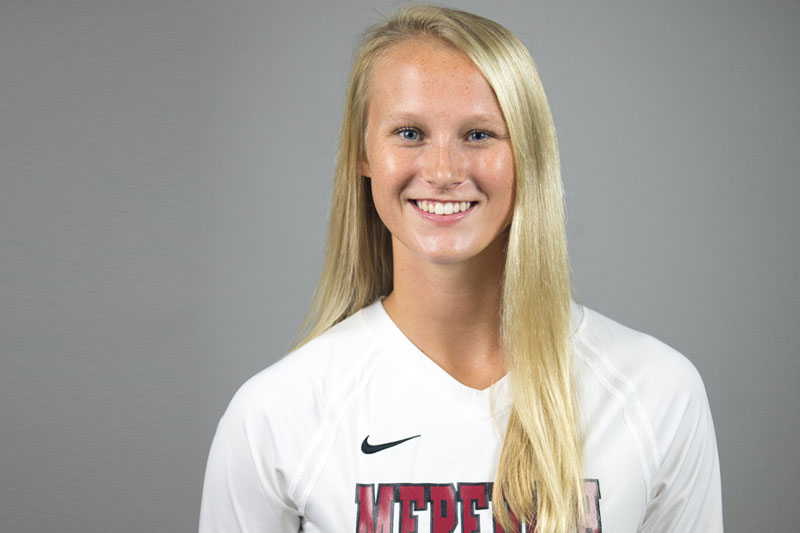 As an Honors Scholar and a student-athlete, Emily Skoglund, ’20, has made an impact on and off the volleyball court. At Meredith, the Asheboro, N.C., native has discovered her passion for helping others.

Emily has been actively involved on campus, participating in the 2018 Emerging Leaders Seminar Series, serving as co-chair for the 2017 Spring Guardian Angel Formal, and being a part of Alpha Lambda Delta Honor Society and the Meredith Health Professions Society.

When Emily arrived at Meredith she intended to major in biology, but an inspiring interaction with Associate Professor of Psychology Gwynn Morris and taking Honors Introduction to Psychology moved her to change her career path.

“Dr. Morris helped me realize there was a true passion in my love for psychology and expressed the importance of finding a path you love and following it, no matter what other people think,” said Emily. “She helped me to realize that psychology was the perfect fit for me because I had such a passion for helping people, but I also liked understanding how the brain works in relation to the body.”

Outside of academics, Emily has contributed to the success of the Meredith volleyball team. As a defensive specialist on the court, she has added several athletic accomplishments to her resume. She is a two-time member of the USA South All-Academic Team and the AVCA Team Academic Award.

“Athletics has given me some of my closest friendships, greatest memories, and most wonderful experiences,” said Emily. “I am so proud to say that I am a Meredith College Avenging Angel volleyball player, not just because I am an athlete, but because my teammates and I are able to play for a program that prides itself on the strength of the whole team.”

When Emily graduates from Meredith she plans to continue her love of helping others by attending graduate school for occupational therapy.

“Meredith has provided me with a foundation in which to follow my passions, and grow in my understanding of who I want to be. I believe Meredith instills these qualities in all of the students that pass through its gates, which is what makes it such a special place for so many.”