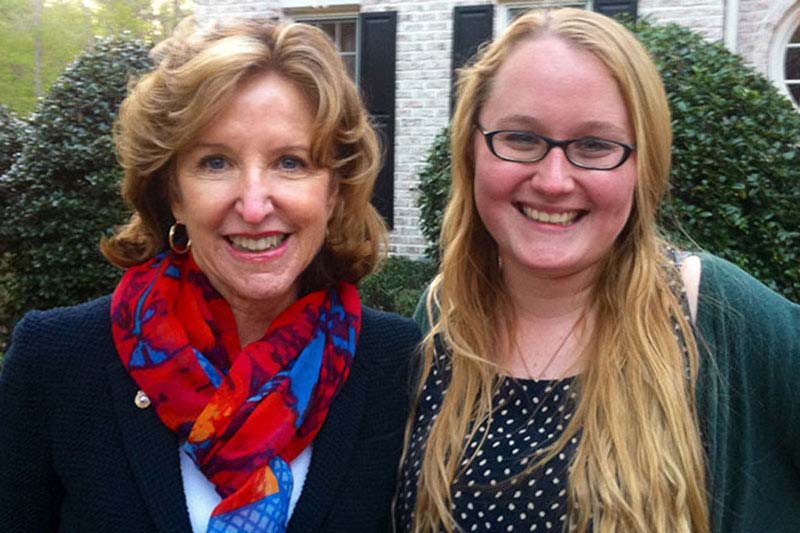 As a political science and Spanish double major, Emily Hawkins, ’14, is on a mission. Her ultimate goal? To help elect the first female U.S. President. And with multiple political campaigns under her belt, she’s well on her way.

Hawkins’ passion for politics – which she’s always possessed – has grown more focused as a result of her experiences as a Meredith College student.

“My coursework at Meredith has expanded my interest in politics, especially my honors thesis course on women in politics,” said Hawkins.

She’s complemented her coursework with a number of political internships – including a prestigious White House internship, which she called “the honor of a lifetime.” She’s also interned for EMILY’S List and with Rep. Deborah Ross in the North Carolina General Assembly. Hawkins is currently the deputy finance director for Ross's U.S. Senate campaign.

Previously, Hawkins interned in the finance office of Sen. Hagan’s re-election campaign. When a full-time finance assistant position became available, Hawkins was selected to fill the role. She now works on the team that raises the funds needed to get Sen. Hagan’s message to voters.

It’s a natural progression for the woman who was appointed to Meredith’s Student Government Association as a freshman and served as the Elections Board Chair for three years – a position that oversees the election of more than 90 women to on-campus leadership offices each year.

“My passion and desire is to elect more women to office,” Hawkins said. “My career plans will definitely include bridging the gender gap in politics.”