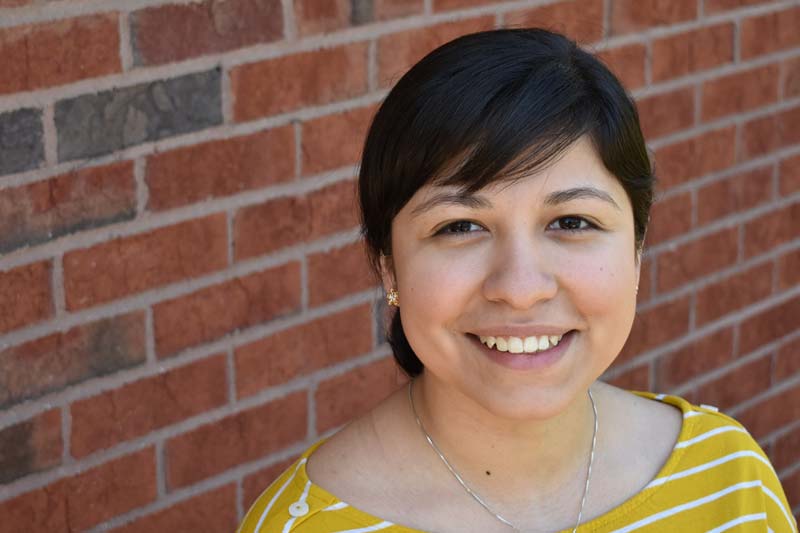 When Elizabeth Leon Evans, ’18, toured Meredith as a senior in high school, college wasn’t really on her radar because she didn’t think she could afford it. After the visit, she fell in love with the idea of earning a four-year degree. Thanks to a serious work ethic and a deep desire to learn, Elizabeth earned her undergraduate degree in social work as a first-generation college student.

While she was growing up, Elizabeth and her parents spent a lot of time moving back and forth from Mexico to the United States to care for her sick grandmother. The constant change was difficult, but Elizabeth can trace some important lessons to these times.

“It was hard adjusting to school because we would typically move mid-school year. Learning math, English, Spanish, and history was always really tough because I would have to catch up on the material,” said Elizabeth. She continued “… that is when I learned to not be afraid to ask questions, because I really had to in order to understand.”

Although Elizabeth’s family was proud of her for being admitted to Meredith, they were unable to support her financially. She worked overtime to make ends meet – her first year of school she worked three jobs at once.

“Sometimes I would attend class on a couple to no hours of sleep, but I knew that my hard work would pay off.”

She enjoyed building relationships across campus, with her classmates as well as her faculty. She especially enjoyed connecting with faculty in her major.

“My relationships with the social work faculty have been the most impactful because they have seen me transform from a student to a social worker.”

Elizabeth also connected with students through her involvement on campus, especially in Angeles Latinas, a student organization. She was the freshman representative her first year, and then served as co-president her junior year.

“I loved being involved with Angeles Latinas because we shared our culture with others on campus and supported each other through good times and tough times.”

Her involvement with the Social Work Club allowed Elizabeth to become involved in advocacy and social justice efforts. It also gave her additional opportunities to spend time with her friends.

“Because I work a full-time job, finding time to spend with friends was always hard, but by attending club-related events I was able to catch up with my friends. We attended conferences, volunteered at the Food Bank, and hosted donation drives.”

In the final semester of her senior year, she completed more than 430 hours in her internship at the Triangle Down Syndrome Network. She plans to work for several years, ideally for an organization that advocates, educates, and fights for social justice, and then return to school to earn her master’s and doctorate degrees. Her ultimate goal is to become a professor in the social work field.

“I am graduating with a degree that I am proud of and passionate about. I hope to use my skills and knowledge to make a difference in the world and be a role model to other Latinx students pursuing their goals.”