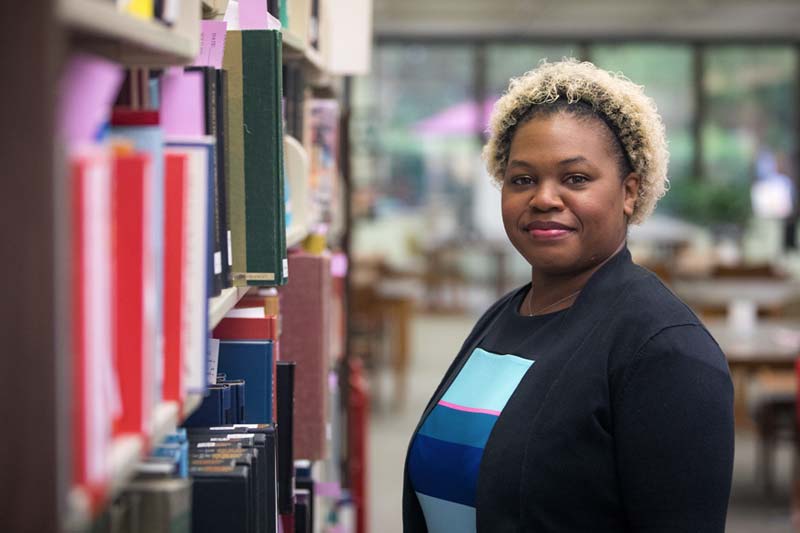 Originally from Charlotte, N.C., Daphne earned an associate degree in business administration in 2016 before transferring to Meredith. She chose to attend Meredith because she knew how strong the reputation of a Meredith degree is in North Carolina.

“When I first visited Meredith College, I was taken back by how beautiful and quiet the campus was,” Daphne said. “I remember how welcoming faculty and staff were to me during the WINGS information session. Most college campuses are geared towards traditional students, and the existence of the WINGS program really drew me to the college.”

Daphne wanted to pursue political science because she believed it would allow her to have an impact on the world. “The more you know about the political system, the more you can help,” Daphne said. “It’s important to see how the social system benefits different groups. I’m passionate about running for office because most candidates don’t really know what really affects the black community.”

This summer, Daphne interned with the General Assembly in the House of Representatives under Representative Kelly Alexander, who has a history of activism within the African American community. The experience has been eye-opening for Daphne, who said she learned a great deal about the day-to-day procession of law and government. “I found that what I thought I understood about government, I really had no clue about.”

As an independent student, Daphne has had to overcome a number of financial challenges during her time at Meredith. To support herself, Daphne works on campus in the circulation department at Carlyle Campbell Library in addition to pursuing her degree as a full-time student. Despite the challenges she has faced, Daphne’s resolve has not wavered.

“Many obstacles due to outside circumstances have been thrown at me during my time at Meredith that were simply out of my control. However, I am only in control of how I react to a situation, and I can either let it break or make me,” Daphne said. “I chose to let each obstacle that I have faced develop me into the person that I am in the process of becoming.”

Daphne says she has found support in numerous places around campus, from her peers to her professors to the maintenance and other staff. “One of the many things that I have enjoyed while attending a women’s college is the relationships that I have formed.”

Despite her busy schedule, Daphne has been active on campus. She has been involved with the Student Government Association (SGA), and has held a number of leadership positions, including president of Women in New Goal Settings (WINGS) and vice president of the Black Student Union (BSU). Daphne currently serves as president of BSU.

“I have taken almost every opportunity presented to me to assist with growing in my leadership skills while being a servant leader to others on campus as well as the community outside of Meredith,” Daphne said.

Daphne feels that working with her peers in leadership roles has inspired her and allowed her to encounter new perspectives. She hopes to use the knowledge she has gained in her future career as a politician.

“Being actively involved in these wonderful organizations has enriched my educational experience by having the ability to encourage and inspire others,” Daphne said. “My leadership roles in these organizations are prepping me to, one day soon, become an elected official for North Carolina.”

Daphne currently works as legislative assistant for Senator Erica Smith. She also has several goals laid out for her future. She intends to apply for an internship in 2019 with the Congressional Black Caucus in Washington D.C., and has plans for continuing her education.

“After I graduate from Meredith, I plan to attend graduate school part-time with full-time employment in the government sector. I am working toward becoming a Congresswoman,” Daphne said. “I have a goal to work in a career that I know will make a positive long-standing impact in other people’s lives.”