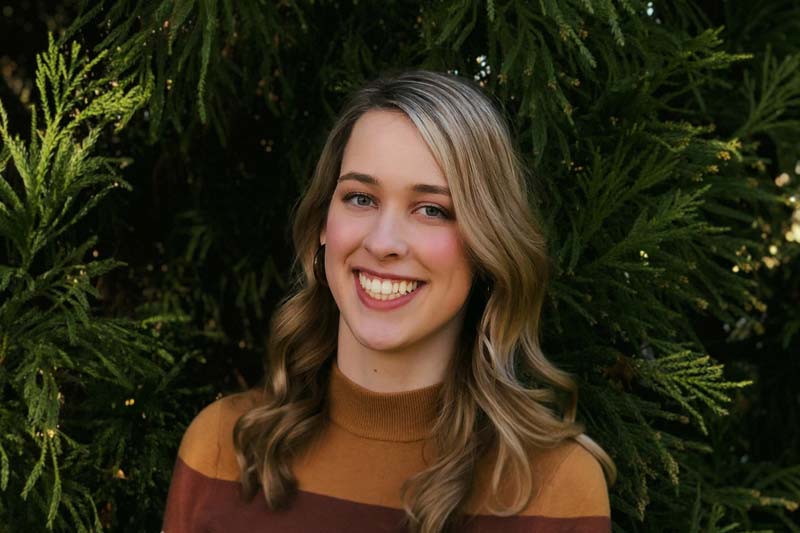 Having taken full advantage of opportunities to become even stronger at Meredith, Bailey Birtchet, ’21, is more than ready to take on her next challenge as a Fulbright award recipient. Bailey will be studying in the Netherlands at the Master Institute of Visual Cultures, St. Joost School of Fine Art and Design.

Majoring in graphic design with a minor in marketing, Bailey has built a robust resume through a series of internships as well as undergraduate research.

Her three internships have allowed her to gain practical skills while she added to her portfolio and discovered the aspects of her field that were most compelling.

“My advisers at Clean helped me refine my skills through challenging but rewarding projects, and my portfolio of work improved dramatically during my time with the company.”

She learned an entirely different set of skills through her internship with Harassment Free NC, where she enjoyed creating social media posts and other creative materials. “Helping raise community awareness about sexual harassment, gender-based discrimination, and other social issues has been a rewarding, and educational, experience for me as both a designer and an activist.”

“What has made my research experience so unique is the encouragement I received from my advisers and professors to incorporate graphic design into my work,” she said. “My eyes have been opened to the potential of graphic design to go beyond just the arts and how it can be used in academic research and community-based initiatives.”

The research project that had the biggest impact on Bailey and the direction of her design was titled “Degrees of Women’s Anger: Burning Hot, Cold, or Out of Control.” Through this research, she analyzed the rhetoric and use of anger as an appropriate perspective for social critique and change alongside one of her peers, Ellie Jones, ’20.

With her Fulbright research focusing on sustainability, Bailey’s designer/activist mindset will serve her well in the Netherlands. The project she will be working on there is titled “Designing for a Sustainable Future: Synthesizing U.S. and Dutch Graphic Design Priorities.”

Overall, Bailey’s time at Meredith has shown her that she’s stronger and more capable than she thought as a first generation college student.

“I would not be the same had I not attended Meredith College,” she said. “Every year, even every semester, I learned something about myself that I would not have known had I attended another college or university.”