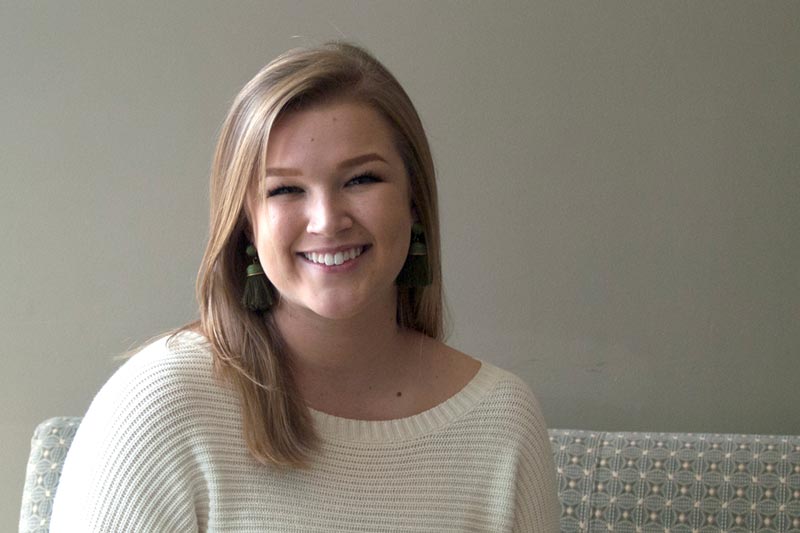 “Going Strong” is more than a brand for Allie Sullivan, ’19, who has found a way to get involved in all aspects of Meredith College’s campus life from traditions to student organizations to performing on stage. Her work on stage has earned recognition from the Kennedy Center.

As a theatre major with a double concentration in performance and design, Allie has performed in 14 productions with notable roles in Waiting for Godot, Lysistrata, Once Upon a Mattress, Decision Height, Marie Antoinette, and She Kills Monsters. She came to Meredith to pursue a career in theatre performance, but was inspired to study technical design.

“All of these experiences have helped make me into the person that I am today,” said Allie. “I feel so blessed by everything that Meredith College has given me and that is part of the reason why I became so involved on campus. I really wanted to give back.”

Allie has expanded her interests beyond campus, taking on a number of internships, including an opportunity with Theatre Raleigh. In addition, she has received special honors for her work in performance and technical theatre, as well as her dedication to the theatre department.

“I received recognition from the Kennedy Center for my work in acting and stage management, which is something I can put on my resume and is deemed highly prestigious in the theatre world,” said Allie. “My awards in outstanding performance and technical theatre were departmental awards, meaning that I was recognized for being the top of my class for my dedication, hard work, and talent.”

Not only does she attribute her success to these unique experiences, but she sees her family, friends, Meredith sisters, and mentors as her main source of strength. Allie credits the Meredith faculty and staff specifically for their ongoing encouragement and willingness to push her beyond her comfort zone. Three of her theatre professors have served as her mentors.

“Jenni Mann-Becker, Steven Roten, and Cathy Rodgers have all had a huge influence in shaping me through my years at Meredith. I’ve learned that women are strong and I’ve got to stand up for what I believe in because if I don’t then no one will,” said Allie.

Roten played a major part in Allie’s development as an actress and pushed her to take risks. “I have grown as a person and an actor. He really pushed me further out of my comfort zone than anyone ever had before,” said Allie. “Looking at it now, I realize that everything that he did was only to make me better and to prepare me for when I go out in the real world.”

Through her study abroad experience in London, Allie’s life was changed. A part of that change was because of her interactions with Cathy Rodgers, professor of theatre. “I am blessed to know her and to be guided by her in my last couple years at Meredith,” said Allie. “We shared so many wonderful experiences and common loves in the United Kingdom.”

After graduation, Allie plans to save enough money to return to London to perform in theatre. Studying abroad not only brought her new memories, but new relationships and a newfound confidence.

“Studying abroad helped me find my missing piece. It helped me fully become the person I was meant to leave Meredith as,” said Allie. “Meredith has given me the opportunities and strength to go out of my comfort zone and try new things. I have the confidence in myself to go for my dreams wholeheartedly.”