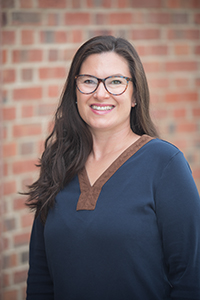 Director of the Learning Center, Instructor of English

Tina Romanelli is the director of the Meredith College Learning Center and an instructor of English. Dr. Romanelli joined the Meredith faculty in 2015, bringing more than ten years’ teaching experience at the high school, community college, and university levels. She has also worked as a writing tutor, web master, yoga instructor, and restauranteur at various times in her life and loves reading fantasy novels, playing video games, and baking bread.

In the Learning Center, Dr. Romanelli strives to create a warm and welcoming environment by supporting tutors in their efforts to support the larger Meredith College community. She has a long-standing passion for helping students who are struggling to find their confidence as scholars and for transparency in management and assessment. A member of the College Reading and Learning Association and the National College Learning Center Association, Dr. Romanelli trains tutors at least once per semester in the IDS 155: Tutor Training course. Her favorite training modules are on reading comprehension and time management strategies.

Dr. Romanelli’s research focuses on women’s roles, social justice, and the supernatural in early modern literature. Her recent publications and presentations challenge the idea that the medieval and early modern periods were primitive, oppressive times and point out the alternative possibilities to modern problems in historical texts. She is always ready to share a cup of tea and conversation about Shakespeare, studying, or whatever is on her students’ minds!

Review of Siegfried, Brandie R. and Lisa T. Sarasohn. Eds. God and Nature in the Thought of Margaret Cavendish. (Ashgate, 2014). This Rough Magic: A Peer-Reviewed, Academic, Online Journal Dedicated to the Teaching of Medieval and Renaissance Literature. June 2015.