When You Give an Angel a Pencil 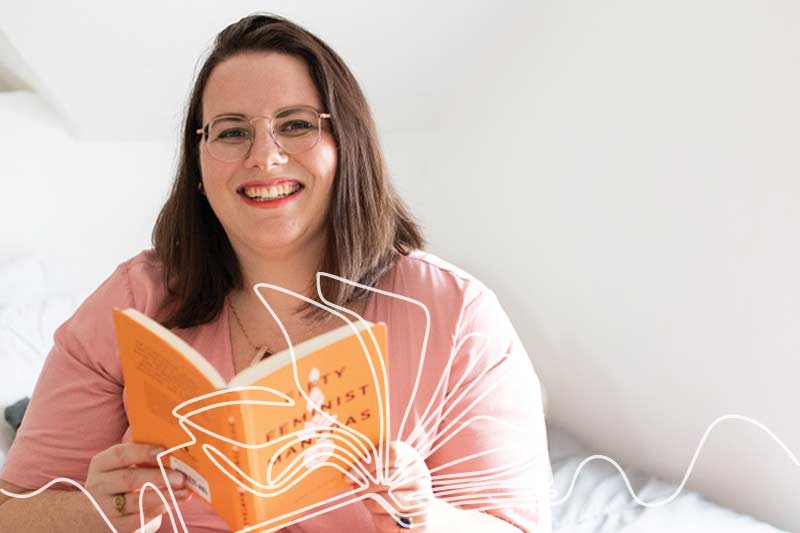 One of the hallmarks of a women’s college education is confidence. Confidence to lead, to speak up, and to make a positive impact on the world. These are all skills Meredith graduates walk across the stage with after completing their degree, which makes them skilled writers and communicators. That’s why it comes as no surprise that many Meredith alumnae have gone on to become authors of some brilliant pieces of work, particularly in the realm of social justice. From a collection of feminist mantras, to a guidebook on how to navigate gender bias, to a memoir from Meredith’s first student of color, alumnae are telling their stories and making an impact through the written word. 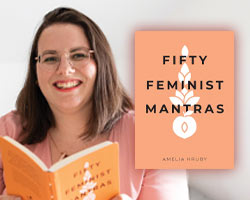 Ever since she was a teen, Amelia Hruby, ’13, has turned to pen and paper as an outlet. She further explored her interest in writing at Meredith, where she double majored in English and religious and ethical studies as a Legacy Scholar.

“I’ve always loved figuring out my thoughts and feelings on the page,” said Hruby. “I took a lot of creative writing courses at Meredith that really helped me explore different genres and styles.”

One topic that Hruby became particularly interested in exploring during college was feminism. She studied the subject while she was in graduate school at DePaul University, where she earned her master’s and doctorate in philosophy.

The more Hruby learned about feminism, the more her desire grew to share the information with others. “I wanted what I was learning in my courses to be more readily accessible to my friends and communities,” she said. “That’s when I began writing more about feminist ideas and values.”

Hruby’s desire to teach others about feminism, paired with her love for writing, eventually sparked the idea for her recently published book, Fifty Feminist Mantras.

The book is an illustrated journal filled with 50 memorable phrases and words about feminism. Along with each mantra comes a guided reflection and prompt to help readers digest the material and apply it to their own lives. Throughout the journal, Hruby left blank pages for readers to reflect through their own writing.

“The book is organized in a way that helps readers explore how cultivating feminist values such as empathy, community, imagination, intuition, pleasure, joy, and soft power could radically disrupt the power of patriarchy, white supremacy, and capitalism,” she said. “It’s a really beautiful book that invites reflection and transformation.”

Next to completing her doctorate, publishing Fifty Feminist Mantras is one of Hruby’s proudest professional accomplishments. “Both were years-long journeys that required immense fortitude,” she said. “I wanted to quit many, many times, but I didn’t because of a combination of strength, will, and community encouragement.”

Hruby credits her Meredith education for helping her become a confident writer and scholar. “My time there helped me see my abilities and believe that I could do great things,” she said. “I’m so grateful to my mentors at Meredith and for their ongoing support of my work.”

You can pick up a copy of Fifty Feminist Mantras at bookshop.org, Amazon, or Barnes & Noble. You can also listen to Hruby on her podcast, Fifty Feminist States, where she explores feminist topics through the lens of gender justice and queer liberation while traveling around the country. Learn more at fiftyfeministstates.com. 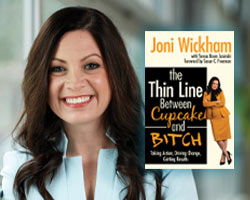 Author of The Thin Line Between Cupcake and Bitch

Government and politics have been of interest to Joni Wickham, ’03, ever since she can remember.

After graduating from Meredith with a degree in political science, she went on to earn her master’s from the University of Missouri. From there, she began her career working in a variety of offices and campaigns at the local, state, and federal level.

Wickham spent eight years of her political career working for the mayor’s office in Kansas City, Missouri, six of which she served as chief of staff. During her tenure, she directed public policy initiatives, managed communications, and advised on key decisions, all while supporting important issues surrounding women in leadership.

Though serving as chief of staff gave Wickham a seat at the table for many important conversations, it also gave her an up-close look at the harsh reality of local government and how it’s still very much a man’s world.

“More often than not, I’ve been the only woman in the room in many meetings, conversations, and events,” she said. “Gender bias and social norms have been so evident to me because it’s been my lived experience, and the experience of many women I’ve worked with.”

Her experience as a woman in a leadership position and her desire to empower other women to pursue similar roles is what inspired Wickham to write her book, The Thin Line Between Cupcake and Bitch. The book offers readers guidance on how to recognize and overcome gender bias in the workplace through real stories and practical advice.

“I wanted to write a book detailing insights I’ve gleaned throughout my career – from impostor syndrome, to executive presence, to communication and leadership style,” said Wickham, “and the time was right once I stepped away from the hustle and bustle of City Hall.”

The reaction from readers has been unbelievable to Wickham, particularly the fact that it was on Amazon’s best-seller list before it was even released. “I think it shows that both men and women are looking for honest, authentic conversations on this topic,” she said.

Alumnae will be interested to know that Wickham actually details many of her own Meredith experiences within the book, as she found them to be extremely formative and instructive in her career. “My experience at Meredith gave me the confidence I needed to get out of my comfort zone and aim high,” she said, “and writing a book is a massive undertaking, so the lessons I learned at Meredith about leadership and excellence really helped prepare me.”

The Thin Line Between Cupcake and Bitch is available for purchase at Amazon and Barnes & Noble. 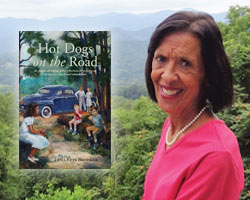 Author of Hot Dogs on the Road

Growing up an American Indian girl in eastern North Carolina during the Jim Crow era, Lena Epps Brooker, ’62, has many stories to tell.

She went from being one of 30 American Indian students at her high school to being the first woman of color to graduate from Meredith. From there, Brooker became an elementary school teacher and became well known for her service in organizations supporting women, diversity, and the arts.

But before making history, Brooker had to overcome the pain of growing up during a time of lawful segregation. Because her community was home to an almost equal percentage of people with white, Black, and Brown heritages, she lived under specific laws separating the three groups of people, making for a social environment that was extremely divisive and wounding.

As Brooker navigated the world outside of her home in rural Robeson county, she found that many people were, and still are, unaware of the struggles she faced growing up as an American Indian. She knew it was important for the whole truth to be told about what the world was like during Jim Crow, and she knew she had the power to make that happen by sharing her story. And despite all the obstacles she faced living in a racist society, Brooker believed that she could embrace and embody an optimistic vision of the future.

This optimism and desire to tell the full truth is what ultimately inspired Brooker to write her memoir, Hot Dogs On The Road. The book, published in 2017, features a collection of personal stories and reflections about what it was like to “grow up brown in a black and white world.”

One of Brooker’s greatest motivators for putting the pen to paper was her two daughters and her grandchildren. More than anyone, she wanted them to know the full story of her life. “My daughters knew about parts of my growing up but not much about the big challenges, the tears, and the triumphs,” she said. “I wanted them to know both the facts and feelings, because both are always involved when discrimination and oppression occur.”

Brooker also wanted her heirs to know how her parents supported her and taught her how to react to ignorance, insults, and injustice. “Their responses resulted in my positive self-esteem and my lifelong commitment to believing that all people deserve respect,” she said. “I wanted to make certain that my children and grandchildren understood why that’s so important to me.”

Being that American Indians have historically been subjected to stereotypes and discrimination in books, movies, and the minds of many, this book was an opportunity for Brooker to change the narrative around her heritage. “The majority of books written about us have glossed over or omitted many facts,” she said. “We were, for many years, lost in the cracks of a black and white society.”

Since publishing the book, Brooker has had the opportunity to host readings, signings, and discussions at different events all across the state. In 2019, it was added to the shelves of Carlyle Campbell Library at Meredith. “It’s especially touching that Dr. Campbell, the president of the College at the time and the man the library is named after, was the one who made it possible for me to graduate from Meredith as the first person of color,” she said.

Considering Brooker didn’t even feel confident in her writing skills upon arriving at Meredith over 60 years ago, the fact that her book now sits on the shelves of the library is a powerful symbol of her perseverance. “As a freshman, I barely passed English,” she said. “My academic background wasn’t on the same level as many of my classmates. But learning good study habits and having a few very supportive professors made my studies successful.”

Brooker may even set out to write a second book, perhaps a sequel to the first one or an inspirational piece on her late husband’s battle with cancer.

Learn more about her life story by reading her book, Hot Dogs On The Road, available for purchase at Amazon and Barnes & Noble.