Someday Soon We Will Travel Again 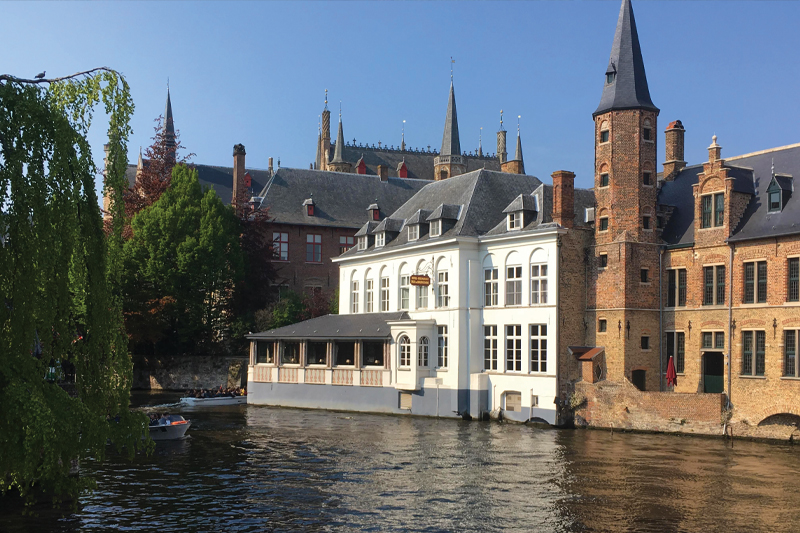 Editor’s Note: While we know that travel is currently not possible, we look forward to having alumnae join the Meredith Travel Program when it resumes.
It is a wonderful way to be with friends and make new Meredith connections.

The Meredith Travel Program, which started in 2014, has taken alumnae and friends to Italy, Ireland, Spain, Cuba, the Netherlands, Belgium, and even to cruise the Blue Danube. The program currently includes three trips each year and an annual trip to New York City in November.

“The travel program was started to offer our loyal alumnae an educational and engaging opportunity to travel together and to bring new friends to the Meredith community,” said Denise Parker, associate director of alumnae relations.

Participants who have been on multiple trips and those who are new to the Meredith Travel Program agree that traveling with Meredith alumnae, spouses of alumnae, or friends of alumnae creates a special bond. This sense of cohesiveness within the group enhances the experience and builds connections that last far beyond the trip itself. 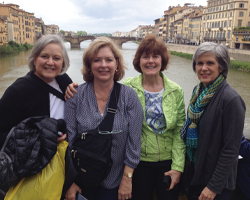 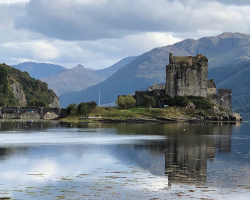 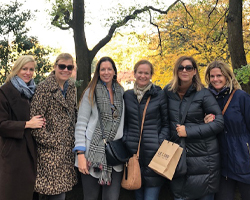 Every Detail is Covered
If anyone can talk about the many trips that have been offered it is Betty Baird Raft, ’56. She has been a frequent traveler with the Meredith Travel Program traveling to England, Canada, Scotland, Spain, Italy, London, and New York City. Raft, who travels alone, says that is no excuse not to be a part of the group.

“The other travelers are friendly, interesting, inclusive for single travelers, and of various backgrounds and areas of expertise,” said Raft. “I absolutely love the trips and I am eagerly awaiting my next trip which, if my count is correct, will be my ninth with Meredith.”

On the opposite end of the spectrum is Sandra McClain Buller, ’72, and her husband, Jeffrey. They took their first trip with the Meredith Travel Program in 2019. McClain had recently retired when they received an email about a trip to Scotland. They decided it would be a perfect trip for them and signed up immediately.

Faculty emeriti Betty Webb, ’67, and Becky Bailey organize and customize many of the trips for the travel program, including the Scotland trip the Bullers took last year.

“Having Betty and Becky plan this trip with their combined knowledge of the British Isles, and its history, art, and culture, made it a rich experience in a different way than we would have experienced with a normal tour group,” said Buller. “They were able to add personal insight into the country and customs and Becky acted as a docent in some of the museums, sharing her art expertise.”

Webb, former director of Meredith’s Office of International Programs, and Bailey, former dean of Meredith’s School of Arts, use their travel experiences to create unique itineraries to “bucket list” destinations and many locations that are off the beaten path. They look for small places that really allow you to feel what life is like for people not living in a tourist mecca.

“We always include UNESCO World Heritage sites, which include manmade and natural wonders that have been determined to be the most important legacy of and for humankind,” said Bailey.

The trips always have an education focus.

“We believe that the fact that these programs are Meredith programs means that our travelers expect to learn from them,” said Webb. “Does that mean that we did not see beautiful places, eat wonderful food, make new friends, and have a great time? It certainly does not! Just ask our travelers!”

As a student Beasley visited Amsterdam but did not have the opportunity to see anything outside the city, so she asked her mother to join her on the trip to see more of the Netherlands and Belgium. It was tulip season so that was a big draw for both of them.

“The program is a great way to travel to another place. You have more time to enjoy the sites because the tickets are purchased in advance to many of the museums or parks,” said Beasley. “Also meeting other alumnae and friends and family of alumnae is such a wonderful opportunity because the group has a myriad of life experiences!” 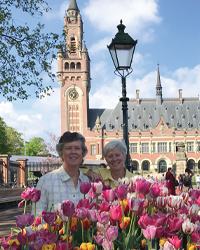 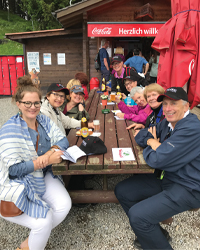 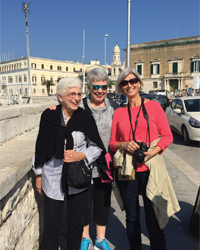 Sharing the Meredith Connection
Sandra Godwin, ’79, and her partner Carolyn Hart’s first trip with the Meredith Travel Program was June 2016. Godwin had just retired and Hart was working part-time when a brochure arrived in their mailbox about Meredith’s upcoming trip to Spain. They signed up.

“The travel group was immediately cohesive, largely due to our shared connection to Meredith as alumnae, friends, and family,” said Godwin. “Becky Bailey was the leader and was so well-prepared, but also warm and caring, and the group easily fell into a level of comfort, trust, and mutual respect that we had never experienced on any trip. We were hooked!”

Godwin and Hart have traveled every year since, going to Cuba in 2017. Their next trips were to Switzerland in 2018 and Holland in 2019. Their favorite experience was staying for two nights in the home of a Cuban family, where they were able to interact directly using “Spanglish” to better understand their lives and experiences.

“The customized experience, value, and Meredith camaraderie will keep you coming back,” said Godwin.

Pat Taylor Clark, ’62, has continued to travel with the Meredith Travel Program since her first trip to England in 2014. Debbie Doss Russell, ’77, was her roommate on that trip. Although there are 15 years between their graduating classes, they found they were perfect roommates.

“Betty Webb knew both of us and thought we would be a good match for rooming together. It was the perfect pairing for me, and Debbie and I have remained good friends over the years since that first trip,” said Clark.

“She was an experienced traveler and I was absolutely a novice,” said Russell, speaking of their first trip. “We shared a lot of our personal lives during that first trip and became good friends, visiting each other in our hometowns when we returned.”

Russell, an English and history major, marveled at all they saw and did on their first trip to England. Her favorite experiences on the trip were related to her English studies, such as reading Wordsworth on the bus on the way to Lake Windermere, finding the memorial stone honoring Meredith English Professor Ione Knight at the Daffodil Garden in Grasmere, or being able to walk among the ruins in Lindisfarne where the monks created the famous illuminated gospels.

“On the trip, Debbie brought this home economics graduate up to snuff on points regarding British history, dates, people, and literature. She was able to keep me on track,” said Clark.

Fun in New York City
Hilary Allen, ’01, director of alumnae relations, organizes the trip to New York City each November for the Meredith Travel Program. Claire Sullivan Slaughter, ’72, her sister Louise Sullivan Peters, ’74, and Judy Williams, ’74, have participated in the trip together for over 10 years, and Williams says there are numerous planned activities or you can go your own way and see things not on the itinerary. The group has attended the Radio City Christmas Spectacular every year.

“It never gets old,” said Williams. “We love the city, shows, fine dining, and, of course, shopping, especially that time of the year. But to have the time to catch up and spend time together without the day-to-day distractions is great.”

“Judy, Claire, and I continue to go every year because Hilary organizes such a wonderful trip,” added Peters. “They take care of all the details and the staff who attend are so fun to be with,” adds Slaughter.

Joy McNeill Chafin, ’97, and five of her classmates would agree. The group of friends who travel together are spread out geographically and do not have the opportunity to see each other often.

“This trip allows us to reconnect and it’s like we haven’t missed a beat,” said Chafin.

The group has traveled to NYC for many years because of the wonderful memories made together. It has become a tradition for them.

“If you go with a group of friends, that’s awesome, you will enjoy your time together. If you do not have a set of friends to go with, no worries, you will meet amazing people on the trip who will be your friends forever,” said Chafin. 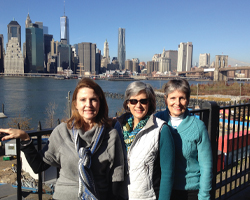 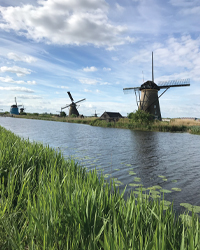 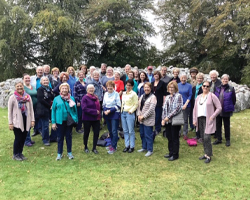 Traveling with Friends
Vickie Owens Robinson, ’74, and Meredith Marr Watson, ’74, went on the very first trip that Meredith College took to New York City and after a couple of times they decided to include their husbands on the College trips. The next trip that caught their eyes was the opening of the Palazzo Alberti in Sansepolcro, the College’s Italian study abroad site. This inaugural trip took place 10 years ago. Betty Webb planned the trip and “put out the welcome mat” according to Robinson.

“I recently returned to Sansepolcro with faculty emerita Ellen Goode leading the adventure and she was just as thorough and a true pleasure,” said Watson.

Robinson and Watson do not live close to each other. Robinson is in Florida and Watson is in North Carolina, so the travel program gives them time to be together.

“We get to share our experiences and reactions to what we have seen and learned each day. Our reactions are always varied and our conversations quite lively,” said Robinson.

Cease found herself in the fall of 2014 eating lunch with her Meredith suitemate and talking about the recent invitation they had received for the “Art of Eating Well” alumnae trip planned for Tuscany. Within 12 hours they had signed up and invited their Meredith roommates to join them in spring 2015.

“We had visited each other prior to the trip and found that we really enjoyed being together again, so we all saw this Italy trip as an opportunity not to miss.”

Allen agrees. “There is a familiarity and comfort level among my Meredith posse. We have stayed close over the years and experiencing the sites of New York City as well as the cultures of other countries was so much more meaningful shared with friends who are like family.”

Just Take the Trip
Margaret Rymer Simmons, ’65, took her first trip to Italy in 2016 and says that before each trip readings, films, and other sources are suggested to give travelers background and help them understand where they are going to visit.

“All the preparation, packing, and anticipation happen before a trip, but truly, just show up on time and get ready for exciting new experiences with Meredith graduates from classes before and after yours. It is amazing.”