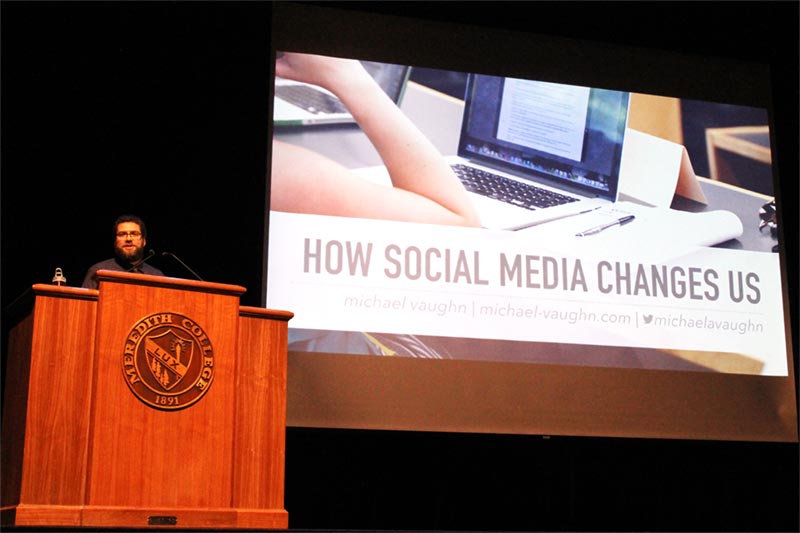 Social media expert Michael Vaughn returned to Meredith College on October 23 to present “How Social Media Changes Us,” in Jones Auditorium. He spoke to students about the ways that social media influences our everyday lives.

“I heard so many great things about his presentation last year that I contacted Chrissie Bumgardner, the co-director of First Year Experience, and we had to bring him back,” said Ann Gleason, dean of students.

First-year students were required to attend the presentation, but it was open to the public allowing people who had heard his presentation the previous year to enjoy a second take. Allston Wade, ’22, and Sofia Gomez, ’22, said, “The presentation was really engaging and he had great memes. We would definitely want him back again next year.”

Vaughn discussed the effects that social media can have on a person’s mental health. From a psychological perspective he brought up emotional contagion, a reaction that happens when a person is exposed to positivity they generate positivity and when exposed to negativity they generate negativity. This same reaction that takes places in everyday in-person interactions occurs through social media interactions as well. Vaughn mentioned that this should be kept in mind when looking at social media; on the one hand, it could be great, while on the other it could be harmful.

“I thought it was such an important message for people of any age, but especially first year students, to hear how the relationships between people are the most important thing and that social media is just a tool that allows us to connect with people easier,” Gleason said.

He wrapped up his presentation with some advice: 1) take time to disconnect, 2) do not creep – it doesn’t work out for anybody, 3) technology isn’t bad, and 4) don’t use technology as a barrier.

At the end of his session he asked the audience to close their eyes for an experiment. He asked them to clap when he counted down from three if they had felt lonely in the last week. 3…2…1…CLAP! The room filled with a unified clap and he concluded his presentation with the reminder that social media is a tool to communicate at a distance, but it is not a substitute for the feeling that a real in-person interaction gives.