She Served Too – Meredith Honors Women Veterans at Annual Event 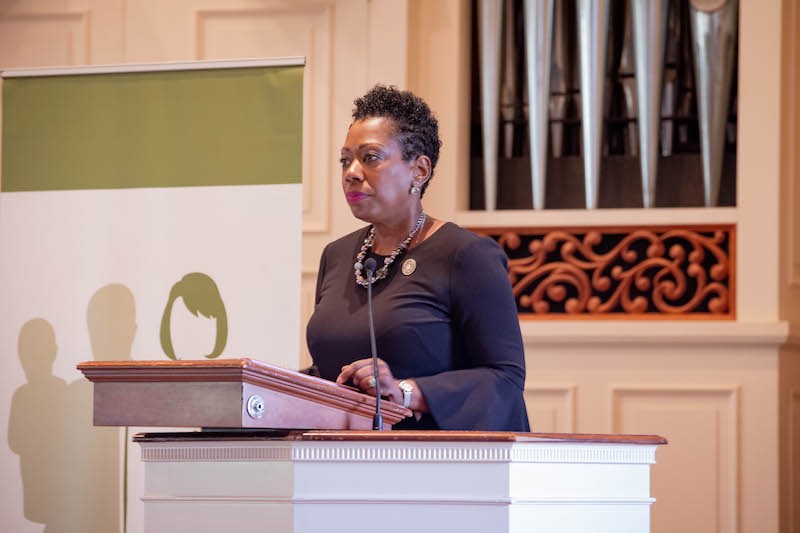 In her speech at Meredith College’s annual Honoring Women Veterans event, Sandra G. Robinson used a metaphor of the pink rose to symbolize women who have served in the military.

“When you close your eyes and think of a rose, you tend to think of the classic red rose, just as you may think of men when you imagine a veteran,” said Robinson, combat female veteran and registered nurse, U.S. Army Reserve. Meredith's Veterans Day observance was held on Wednesday, Nov. 13 in Jones Chapel.

Robinson is founder and president of Combat Female Veterans Families (CFVF) United. The purpose of CFVF United is to encourage and facilitate positive reintegration experiences for combat female veterans and their families, through education, support, and advocacy.

Repeating a refrain of “The Pink Rose – She Served Too” throughout her speech, Robinson emphasized that all women veterans are heroes who served their country, just as their male counterparts did. She invited four women veterans, representing the Army, Navy, Marines, and Air Force, to join her onstage, bringing her message to life for the audience.

Robinson served in the Army Reserve, 846th Transportation Unit and deployed in theater during Operation Desert Storm. She received numerous medals during her years of duty, to include the Kuwait Liberation Medal and the Southwest Asia Service Medal with three Bronze Service Stars.

Despite earning medals for her service, Robinson said when she returned from duty, she didn’t fully appreciate the strength that came from her experiences.

“Your greatest enemy is between your ears – what you believe, and what you tell yourself,” Robinson said. “Not all roses are red; some roses are pink. Women vets served with gratitude and grace. Our service counts. We served too.”

Changing her mindset led Robinson to become an advocate for other women veterans. Her background has afforded her extensive familiarity with women veterans’ post-deployment issues and their gender-specific healthcare needs.

“I needed to become a champion for women veterans, by listening to those who have never been heard,” Robinson said. “In helping my sister veterans, I was also helping myself. Transitioning out of the military is not the end of your purpose. I honor and support my sisters-in-arms through advocacy.”

Robinson noted women have served in military roles for 200 years but weren’t always allowed to be called soldiers, airmen, sailors, or marines.

“Women have been in every U.S. conflict,” she said. “You honor their service by learning their history.”

Other Veterans Day Events
Other Veterans Day commemorations include a panel discussion, She's the Veteran, 10 a.m. in Ledford 101 on Friday, November 15. This event will focus on the breadth of experiences and the challenges facing female veterans. For Meredith students, the chapel event and the panel count for Academic/Cultural Event credit.

The Meredith College Student Scholars, Honoring Women Veterans Committee, and the Office of Student Leadership and Service are collaborating with CFVF United, a nonprofit organization that provides support and advocacy for female combat veterans. They are currently in need of the following toiletries and snacks for holiday care packages for deployed female service members:

Drop off items at collection boxes labeled for CFVF United throughout campus or bring items to SLS Office (202 Cate Center) by Friday, November 22.

Meredith College will again be supporting service members with holiday cards. Please stop by the lobby of the Cate Student Center from 8 a.m. – 5 p.m. from November 11-22 to create holiday cards for the troops. They will be sent to service members through the American Red Cross Holiday Mail for Heroes Program.