President Jo Allen Elected Chair of NAICU Board of Directors 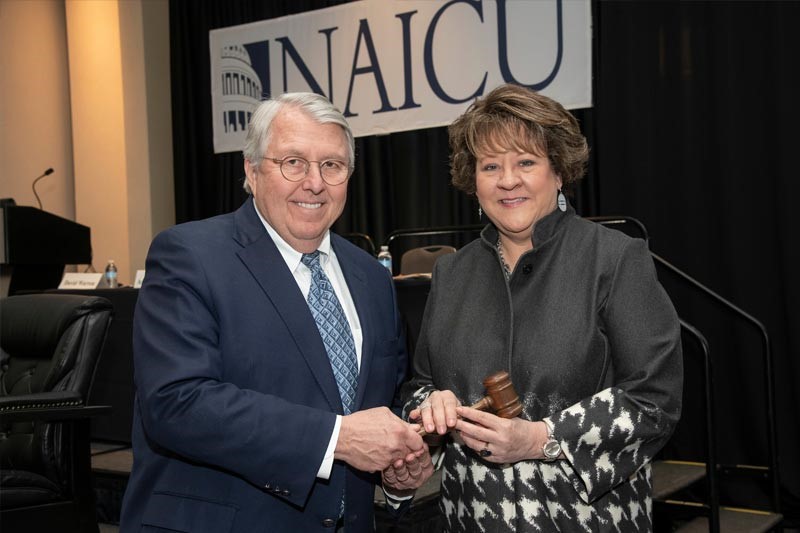 Meredith College President Jo Allen has been elected chair of the Board of Directors for the National Association of Independent Colleges and Universities (NAICU).  Allen took office at the close of the 2019 NAICU Annual Meeting and Advocacy Day held in Washington, D.C.

Allen will serve as board chair during a time of transition for NAICU. Following a 25-year presidency held by David L. Warren, a new president will be joining NAICU this summer.

“My top priority is to ensure a smooth transition,” Allen said. “Being sure the new president understands the identities, roles, and priorities of the member institutions in this transition is critical.”

NAICU is the primary advocate for polices that support higher education. The organization focuses on three areas of interest: tax policies, student aid, and accreditation and regulation.

“Because legislation can unwittingly create undesired consequences, it is critical that NAICU read, analyze, and respond to all legislation affecting higher education in these three areas,” Allen said.

Private colleges and universities play an important role in society, according to Allen.

“These institutions are important, not only because of the diversity of mission, student populations, and opportunities they represent, but also for the simple fact that public institutions do not have the capacity to educate all the students seeking a college degree,” Allen said.  “Our nation desperately needs college-educated citizens who will support our democracy, create new or wider pathways to quality living, and see beyond the immediate to preserve or enhance the benefits of living in a free society."

Allen has served as the eighth president of Meredith College since July 1, 2011. A member of the Class of 1980, she is the first Meredith College alumna to assume leadership of the 127-year-old institution.

“My service to NAICU is largely about giving back to the higher education community,” Allen said. “I am so pleased I was able to enjoy a Meredith education, and I want to be sure future generations—of all kinds of students regardless of wealth and premised on their strengths, interests, and talents—also have the option of pursuing degrees from independent colleges and universities.”

In addition to her role as chair of the NAICU board, Allen serves as the treasurer of the North Carolina Independent Colleges and Universities (NCICU), as a member of the Presidents’ Council of the Cooperating Raleigh Colleges, and on the Presidents' Council of USA South, Meredith's athletic conference.