According to some of the first-ever recipients of Meredith’s Impact Scholarship, these are all definitions of what it means to make an impact.

In 2019, Meredith College announced the launch of a new $20,000 merit scholarship guarantee. The motivation behind funding the scholarship was to help more qualified undergraduate women afford a high quality college education.

“Impact scholarships will help ensure a Meredith College education is accessible to more women with the power to bring about positive change in their workplaces, communities, and families,” President Jo Allen said when the scholarship was first announced.

The current freshman class was the first to have the opportunity to receive the scholarship, which was awarded to all first-year applicants who had a 3.3 unweighted GPA and an 1100 SAT or 22 ACT score.

A total of 175 students in the class of 2024 received the scholarship, making their degree more affordable and in turn, making their chance to have an impact on the world more attainable.

This inaugural group of Impact Scholarship recipients has certainly faced unexpected challenges in their first year at Meredith, but with their first semester behind them, it’s clear they have already begun to blaze a trail for others who receive the scholarship in the future. Keep reading to learn how these students are making an impact on campus. 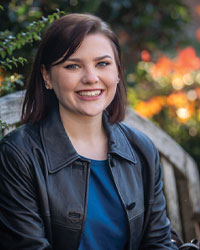 Alexandria Crank, ’24, believes that making an impact is about improving the world around you. As a psychology major on a pre-med track, she has a desire to help others the way Meredith has helped her. “Meredith has helped me grow stronger, advocate for myself better, and increased my confidence,” she said.

Though her first year has been difficult because of her struggle with chronic pain, Crank is comforted by the fact that she feels valued by Meredith. Receiving the Impact Scholarship made her feel like her strengths were something worth investing in. “I feel like Meredith really cares about me,” she said.

Crank is also in the Honors Program and serves as a class representative. She is currently involved with the psychology club and plans to join other health professional clubs as she gets more acquainted with campus. “My goals are to do the best I can, challenge myself, and to grow,” she said. 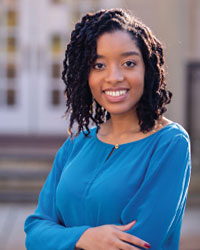 In her first few months at Meredith, Tamara Bomparte, ’24, has already learned so much about where she wants to go in life and who she wants to be. Because Meredith saw her as someone capable of making an impact, she’s been empowered to branch out of her comfort zone.

“More than adjusting to academics, I was worried about finding friends in college, especially during the times we are living in,” said Bomparte. “So I am proud of the way I have joined clubs and made new friends, because that has always been more difficult for me than doing well academically.”

As a member of the Honors Program, Meredith Hues, and the Big Sis/Little Sis program, Bomparte’s opportunities to make an impact stretch far and wide across campus. She is majoring in English so she can pursue her interest in writing, which grants her yet another opportunity to have an impact on others.

Being among the first group of students to receive the Impact Scholarship means a great deal to Bomparte because it afforded her the opportunity to attend what she calls her “dream school” and get the best college experience possible. 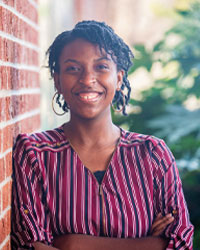 Michaela Murrell, ’24, has already declared her major in accounting, developed relationships with her professors, and connected with recruiters through virtual networking events – all within her first year at Meredith. “I feel very honored to have received this scholarship and I want to show my gratitude by working hard academically and succeeding in my future career so that I can one day give back to Meredith College,” said Murrell.

Murrell is also the freshman member-at-large for SGA, a Meredith Hues member, and a member of the Summer Reading Program committee. Her goals for the rest of her time on campus include building new friendships, being accepted into the Broyhill Business Fellows Program, and studying abroad in Spain.

With the financial help of the Impact Scholarship, these goals feel within her reach. “This scholarship is a huge reason that I can afford to attend this college and I will forever be grateful for that opportunity,” she said. 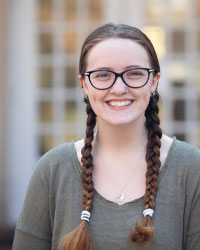 Jessica Harrington, ’24, is another example of a recipient who is making good on the promise of the Impact Scholarship.

Harrington knows the importance of help and how even the smallest of gestures can have a big impact. To her, making an impact means leaving everything better than the way you found it, whether that means pushing in a chair or making someone smile.

As Harrington hopes to become a high school history teacher after graduation, her outlook on what it means to make an impact will serve her well. She is also a Teaching Fellow and member of the Honors Program, and hopes to one day join the Extra Theatre Company on campus.

“Meredith has allowed me to become more independent and branch out,” said Harrington. “I have already been able to make friends and connections that I know will last a lifetime.

These connections, particularly those with her professors, have allowed Harrington to make a smooth transition into college – despite an ongoing pandemic and her struggle with anxiety.

“I have had incredible help from professors in overcoming my anxiety surrounding the big change,” she said.

Harrington is grateful to be a recipient of the Impact scholarship and says it’s one of the main reasons she was able to attend Meredith. “Without that financial support, it would have been a lot harder to come here,” she said. “I hope that it continues to provide the same security to future students.”

These are just a few examples of how Impact Scholarship recipients from the Class of 2024 are getting the most out of their opportunity to attend Meredith. The program has been extended for the incoming Class of 2025 with hopes to provide even more qualified students with a promising future.

Learn how to make a gift to fund scholarships for students like Michaela, Jessica, Alexandria, and Tamara at meredith.edu/support.