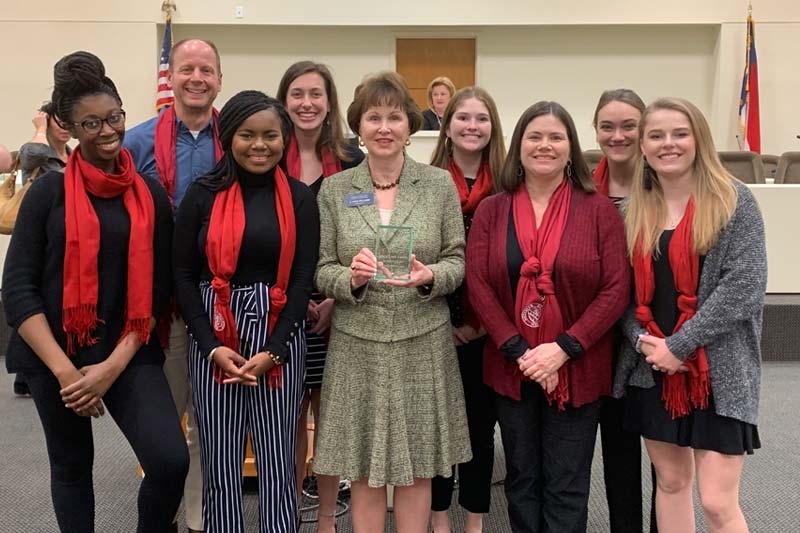 Meredith College competed in the 2019 Ethics Bowl, hosted by the N.C. Independent Colleges and Universities, and made it to the semi-finals.

Students from 22 campuses across North Carolina participated in the event, which was held in February at the North Carolina Legislative complex. The theme was “Ethics in the Environment.” This was the eighth annual Ethics Bowl.

Each Ethics Bowl team consists of up to six students. Campus coordinators work with the students to prepare them for the competition, which consists of four rounds over the two days, plus semi-final and final rounds. In each round, a specially developed case study outlining a complex ethical situation related to the environment was presented to the teams for debate. The round was awarded to the team that made the most sound, persuasive presentation. Approximately 60 business, non-profit and government professionals served as judges and moderators.

The Meredith team won all four of their rounds and moved on to the semi-finals, which included the top four teams from the competition rounds. Along with Meredith, semi-finalists were Wake Forest, Catawba College, and Chowan College. Meredith was defeated by Wake Forest. Catawba was the overall winner.

Johnson, who also participated in the 2018 Ethics Bowl, says the competition allows students to apply a number of skills.

“The Ethics Bowl is a competition that tests your knowledge on ethical theories, fuels critical thinking, and lets you apply skills learned in the classroom such as communication and research,” Johnson said.

Being on the team is hard work but also fun. “We worked together so well and had so much fun together that everyone at the Ethics Bowl noticed it,” Johnson said.

First-time member Shelp-Peck was drawn to the Ethics Bowl team because of this year’s theme.

“I have a passion for environmental advocacy and was really excited about the opportunity to learn more,” she said. “To be part of this team was amazing. I cannot wait to do it again next year.”

Benko said one thing that makes Meredith’s team stand out is the College’s support during the preparation phase.

“We are fortunate that other professors and the Provost gave their time to explain important concepts to the team,” Benko said. “This is not unusual for our team, but it distinguishes their experience from others. That commitment from the College inspires our students to dedicate a lot of their free time to prepare for the competition.”

Jenkins is proud of the students for reaching the semi-finals in a difficult competition. She credits their teamwork and critical thinking skills.

“Each team member contributed so much personally to the success of the team.  Their persistence and endurance paid off and was recognized,” Jenkins said. “I also am glad that each of them learned about the ethics of environmental issues since it is important to our local and global communities.”

Meredith has participated in the Ethics Bowl since the competition began, and has done well each year.

“Most rewarding is that our students take the competition seriously and want to represent the College well,” Benko said. “They know that Meredith College has built up a strong reputation at Ethics Bowl and they want to contribute to that.”