Meredith Recreates Berlin Wall Segment for Anniversary of its Fall 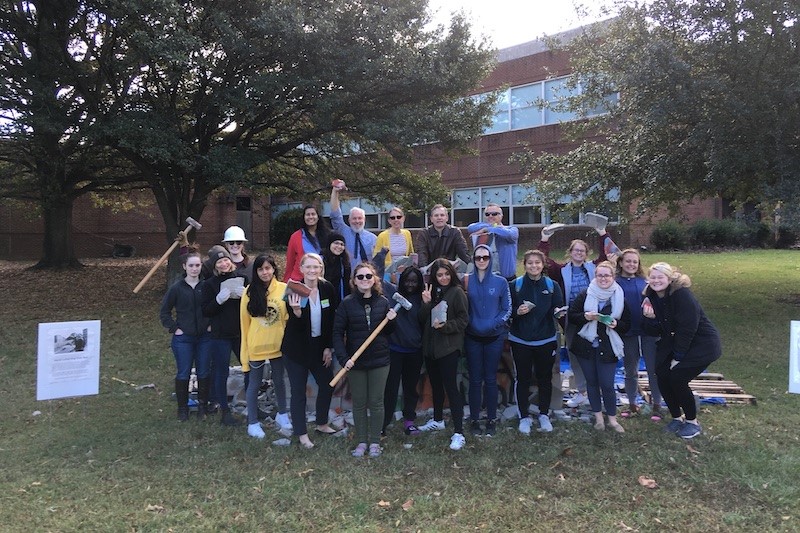 To commemorate the 30th anniversary of the fall of the Berlin Wall, Meredith’s Department of History, Political Science, and International Studies created a small replica of the wall and recreated its destruction here on campus.

Meredith’s commemoration was held on Friday, Nov. 8, one day before the official anniversary. The event involved building an 8-foot-wide by 7-foot-tall cinderblock wall and then smashing the wall. Painting was allowed on the wall’s “free side” only, with no free expression allowed on the other side.

Approximately 30 students and faculty participated in the tear down, which took about one hour. Participants read famous short speeches about the wall, including those by John F. Kennedy, Martin Luther King, Jr., and Ronald Reagan, and listened to music that was on theme for the event. Information was posted at the wall and in Joyner Hall to explain important dates and facts related to the wall.

“All of this was in an attempt to bring this important period of history to the forefront for students, as well as point out the continuing controversies involving walls, free expression, and mass movements,” said Associate Professor of Political Science Jeff Martinson.

Martinson said the event succeeded in getting students to consider the cyclical nature of history and politics.

“As in the late 1980s with the collapse of communism, once again various parts of the world are embroiled in discussions of who the ‘we’ are, what it means to include and exclude people, and the simultaneously liberating and painful consequences of free political expression and mass political activism,” Martinson said.

This was the second time the department had held a commemoration of the wall’s fall, having done a similar event for the 20th anniversary.

The Berlin Wall commemoration event was part of the School of Arts and Humanities 2019-20 common experience theme of Activism: Then & Now.