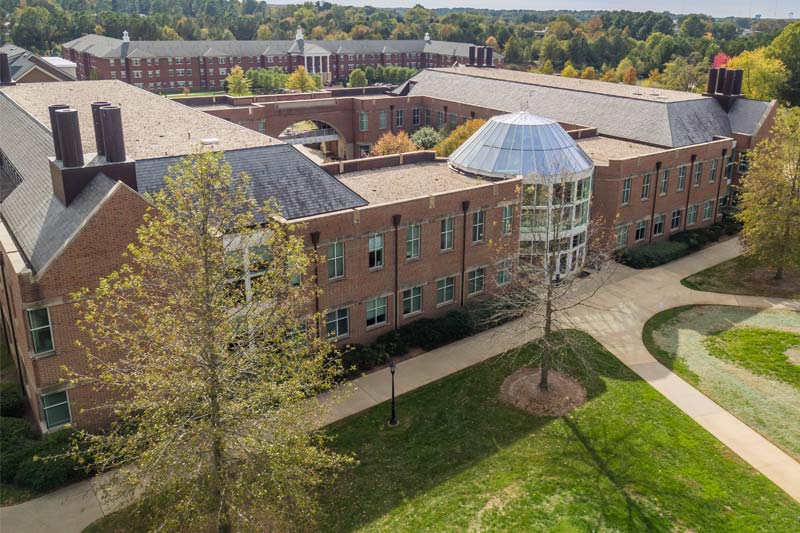 Career Night, which was held at Biogen’s Research Triangle Park office, included a panel discussion, followed by a career fair for Biogen’s many departments. More than 200 students participated in the event.

Biogen is a multinational biotechnology company that manufactures therapies for people with neurological, autoimmune, or rare diseases.

This was the second consecutive year that the Meredith chapter of ISPE has been invited to attend the event. Despite its origins in pharmaceuticals, Jason Andrus, an associate professor of biological sciences at Meredith and faculty adviser for ISPE, assures students that the organization is open to everyone.

“ISPE is an organization that is open to all students of any level whether you’re a science major or not,” Andrus said. “It’s a professional development organization first and foremost, and as such, I think anyone could benefit from it.”

Andrus had similar comments about signing up to network with Biogen. “They hire across the board, so it applies to any discipline,” he said. “You have the opportunity to talk to people who would be your peers if you were hired immediately, who would be your supervisors, and people you would aspire to be like.”

Andrus said that the event can be helpful for students experienced in networking and those who are new to the practice.

“I think students need to take advantage of every resource that they have, and something like this is an easy opportunity for students to start building a network,” said Andrus.

Jacobs made a number of contacts from the event. “I added at least four LinkedIn connections, and received lots of excellent career and networking advice,” said Jacobs.

Erica Occena, ’18, attended last year’s career night and found value in the event. She feels that it’s a great way to put yourself out there and develop as a professional.

“I got a lot of contacts that I kept up with through LinkedIn,” said Occena. “You can never have enough of that, and that’s a really good place to start. Putting yourself out there is good practice to grow and network, which is  something that helps with finding jobs or even just in your own development later in life.”