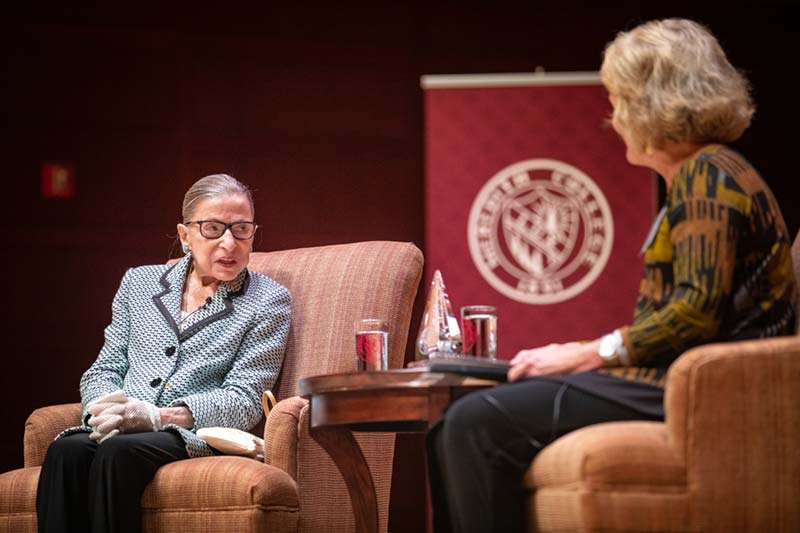 When Associate Justice Ruth Bader Ginsburg walked onto the stage in Meymandi Concert Hall, the admiration of the crowd was on full display as she received an exuberant standing ovation.

Ginsburg, the second woman to serve on the United States Supreme Court, spoke with Meredith College alumna Suzanne Reynolds, ’71, the first woman to serve as dean of the Wake Forest University School of Law and a national expert on family law.

Their conversation was wide-ranging, covering topics from Ginsburg’s legendary stamina, to her loving and supportive marriage, to her surprising friendship with fellow Supreme Court justice Antonin Scalia.

Through it all ran consistent themes of civility, humor, hard work, and devotion to the law and community.

A “Woman of Achievement”

President Jo Allen, ’80, introduced Ginsburg and presented her with the “Woman of Achievement” award.

“As a women’s college, Meredith has been breaking down barriers for women since the College was established 128 years ago,” said Allen. “Tonight’s honoree has dedicated her extraordinary career to doing the same and I can think of no one better suited to receive this award.”

Allen noted that Meredith alumnae and friends of the College were watching via livestream. Viewers took in the event from as close by as St. Mary’s School, where a group of high school women gathered to watch, and as far away as Dubai, UAE, and Sansepolcro, Italy. Approximately 9,600 individual viewers logged on to watch the historic event.

Ginsburg shared stories of how her family relationships had contributed to her professional success. Her mother, who died while Ginsburg was still a teenager, told her early on to be independent and be a lady. Ginsburg explained what her mother meant.

“It would be fine if you met and married prince charming, but always be ready to fend for yourself. And don’t waste time on emotions that won’t get you anyplace,” said Ginsburg. “A lady doesn’t let those emotions interfere in her life.”

Ginsburg spoke at length about her relationship with Marty Ginsburg, her “life partner.” She described him as her “biggest booster.”

“He thought the work I was doing was at least as important as the work he was doing. He never saw me as a competitor,” she said.

Addressing Meredith students who live in a time of unlimited options for women, Ginsburg provided context for her lifelong work to eliminate gender discrimination. “For women of my generation, the big challenge was to get the first job.”

In response to a question from Reynolds, she talked about how important it is to have Justices Sotomayor and Kagan on the court with her, particularly for the public opinion. She reflected on the period after Former Associate Justice Sandra Day O’Connor retired.

“It was very difficult for me being the lone woman,” she said. “Now we look like we’re there to stay – no longer one-time curiosities.” She added “My sisters-in-law are no shrinking violets.”

Ginsburg is often asked about her friendship with Justice Antonin Scalia. While they did not share the same views of the Constitution, they both cared about good writing and shared a passion for the opera. They also had in common a great love of family and often celebrated New Year’s Eve together.

Professionally, they had significant differences, but even in that venue, she said, they found a way to interact civilly. For example, she related that Scalia once gave her a copy of his dissent before he was ready to circulate it to the rest of the court because he wanted her to have as much time as she could to respond.

“I loved Justice Scalia and miss him very much,” she said, describing how they would sit next to each other and he would whisper things to make her laugh. “He was a very funny man.”

In describing the other justices, she said they are all different but they are one in their commitment to the Supreme Court.

“We have to be collegial. Collegiality really matters in our workplace.”

Meredith had been preparing for Ginsburg’s visit to ensure students made the most of it. First-year students read Notorious RBG: The Life and Times of Ruth Bader Ginsburg for their summer reading book and discussions were held across campus. Approximately 500 community members gathered on September 19 in the McIver Amphitheater to watch an outdoor screening of the documentary RBG.

Student adviser Madelyn McKinney, ’20, attended the film with her group of advisees. She, like many, found Ginsburg inspiring.

“I enjoyed watching her overcome the obstacles that she faced. Most people would have given up, but through everything she persisted,” said McKinney. “As an exercise and sports science major, I really enjoyed learning about her workout routines. It’s encouraging to see someone at her age still care about her health.”

Ginsburg also spoke at an on-campus event the afternoon of September 23. Megan Gale, ’21, said the student event was “ … monumental. She inspired me to reach for things that seem impossible. I felt history was being made in front of my eyes this afternoon.”

Neali Helms, ’21, also attended the student session. “I feel extremely fortunate to have had the privilege to witness such a historic moment for Meredith College,” said Helms. “Ruth Bader Ginsburg embodies the true definition of a strong woman; empowered women empower women!”

In addition, a campus-wide essay contest was held, with five students winning coveted tickets to both the afternoon and evening events.

The Importance of Community

The fund that made the lecture possible was established by the Class of 1971 in honor of Lillian Parker Wallace, former history professor and department head at Meredith. Two years following the inception of the fund, the Class of 1973 officially added its support. Anne Bryan, ’71, who greeted the audience initially, noted that the Lillian Parker Wallace Lecture fund has recently passed the $1 million mark.

Numerous members of the Class of 1971 were present, coming from as far away as Michigan for the event, both to see Ginsburg and to support their classmate, Suzanne Reynolds.

“We’re all extremely proud of Suzanne’s success and excited for RBG to be here. Our class has been working on this for several years and it’s great to see it all come to fruition,” said Lavinia Evans, ’71.

Ginsburg’s closing advice touched on the importance of community, as she encouraged those listening to find something they are passionate about and do something positive to help others who are less fortunate.

“Whatever field you choose to pursue, do something that will bring people together,” she said. “Do something to help repair the tears in your community.”

Ruth Bader Ginsburg was born in Brooklyn, New York, March 15, 1933. She married Martin D. Ginsburg in 1954, and has a daughter, Jane, and a son, James. She received her B.A. from Cornell University, attended Harvard Law School, and received her LL.B. from Columbia Law School. She served as a law clerk to the Honorable Edmund L. Palmieri, Judge of the United States District Court for the Southern District of New York, from 1959–61. From 1961–63, she was a research associate and then associate director of the Columbia Law School Project on International Procedure.

Ginsburg was a Professor of Law at Rutgers University School of Law from 1963–72, and Columbia Law School from 1972–80, and a fellow at the Center for Advanced Study in the Behavioral Sciences in Stanford, California from 1977–78. In 1971, she co-founded the Women’s Rights Project of the American Civil Liberties Union, and served as the ACLU’s General Counsel from 1973–80, and on the National Board of Directors from 1974–80. She served on the Board and Executive Committee of the American Bar Foundation from 1979-89, on the Board of Editors of the American Bar Association Journal from 1972-78, and on the Council of the American Law Institute from 1978-93.

She was appointed a Judge of the United States Court of Appeals for the District of Columbia Circuit in 1980. President Bill Clinton nominated her as an Associate Justice of the Supreme Court, and she took her seat August 10, 1993.

Suzanne Reynolds, ’71, has been a member of the Wake Forest law faculty since 1981, including serving five years as dean. Reynolds, who was the first woman to lead the law school, stepped down as dean in June 2019. Known nationally for her expertise in family law, Reynolds was a principal drafter of statutes that modernized the laws regarding both alimony and adoption. She is the author of a three-volume treatise on North Carolina family law that has become the authoritative source for law students, lawyers, and judges.

If you missed the Livestream, it is still available on YouTube.