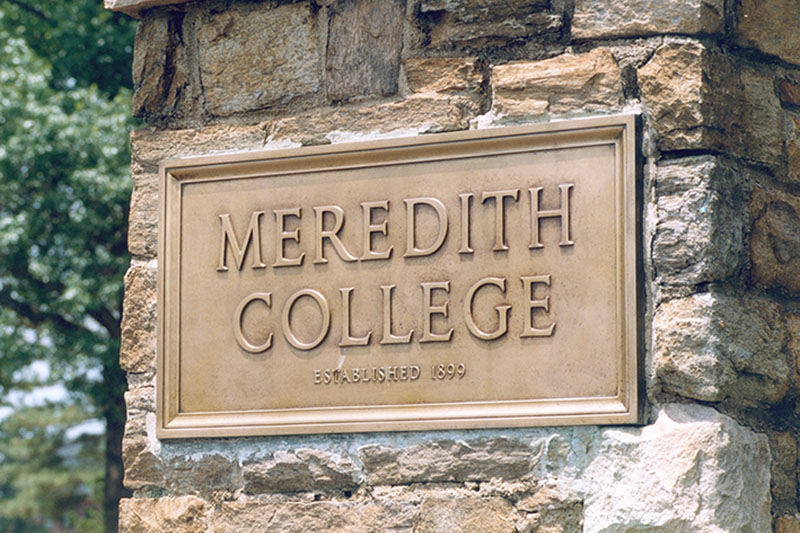 Meredith College is one of seven colleges and universities from across the country selected to serve as regional hubs for a multiyear project of the Council of Independent Colleges (CIC). The selection was announced on February 8, 2021.

The new partnership is part of CIC’s “Legacies of American Slavery: Reckoning with the Past,” an initiative designed to explore the continuing impact of slavery on American life and culture. The CIC initiative is supported by the Andrew W. Mellon Foundation and administered in cooperation with the Gilder Lehrman Center for the Study of Slavery, Resistance, and Abolition at Yale University.

Each partner school will focus on a specific theme that has both local and national significance, organizing regional activities while contributing to a national conversation about race, equity, freedom, political power, and cultural resilience.

“Being selected as a regional hub gives Meredith the opportunity to extend our efforts to celebrate the political courage and achievements of women of color through an expansion of the Women’s Oral History Project,” said Dean of Arts and Humanities Sarah Roth. “We are also excited to work with our community partners to support BIPOC women in becoming influential political agents for a more just and equitable future.”

Meredith will focus on the theme of Contested Citizenship. Partnering with other CIC schools and community organizations, the College will emphasize and support the political activity of women of color through an oral history project and a political leadership institute.

Oral History Project
As a way of showcasing BIPOC women who have fought for equity in voting rights or served in political office, faculty and students will create an archive of oral history interviews with politically active women of color from across the state and region. Professor of History Dan Fountain will direct the Oral History Project.

Political Leadership Institute
In collaboration with community partners Advance NC and the North Carolina Black Alliance, Meredith will also begin hosting an annual political leadership institute for BIPOC women in the summer of 2021. The political leadership institute will train women of color who are interested in becoming more involved in political action, including seeking appointed office or running for elected office. The Political Leadership Institute will be organized by Professor of Political Science David McLennan and La’Meshia Whittington-Kamenski, ’16, deputy director of Advance Carolina.  The institute will have an advisory board consisting of political leaders from across North Carolina with experience in community organizing, political officholding, and public policy.

“As educators, we are called to explore our history and impacts, even when it is painful to do so.  As part of Meredith’s commitment to anti-racism, the Council on Independent Colleges has recognized Meredith as a valued site in exploring slavery and other elements of racism,” said President Jo Allen.  “I am proud that our faculty, staff, and students seek to better understand the balance of ways that our history has helped some at the expense of others.  The work they are doing will, we hope, lead to a more inclusive community and learned sense of our roots.”

Other regional hubs for the CIC initiative are Austin College, Centenary College of Louisiana and Huston-Tillotson University in partnership, Dillard University, Lewis University, and  Sewanee: The University of the South.

About Meredith College
Meredith College challenges students to discover what makes them strong, build on those strengths, and prepare to make a positive impact on the world. With more than 80 undergraduate academic programs, close to 30 graduate and certificate programs, and StrongPoints®, a powerful strengths-focused personal coaching initiative, it’s no wonder U.S. News, The Princeton Review, and Forbes.com have all named Meredith a “Best College.” Wherever you’re going in life, lead with your strengths – and go strong.