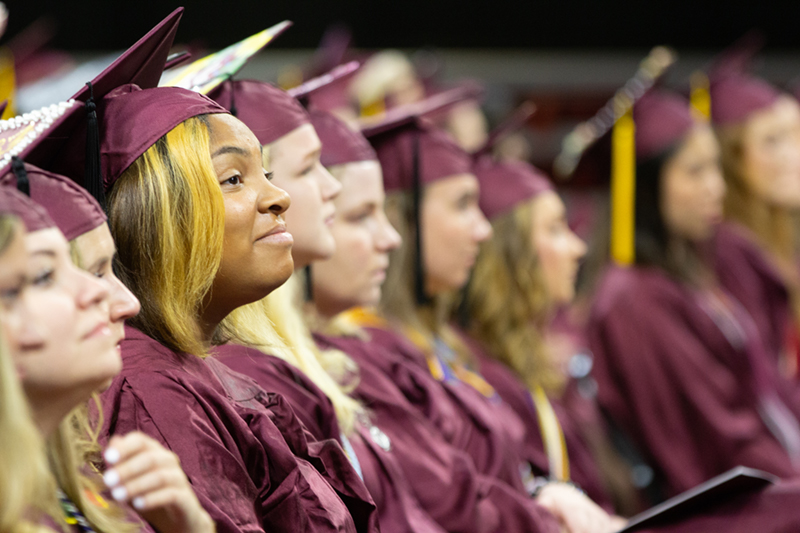 Meredith College held its commencement exercises for the Class of 2019 on Saturday, May 11, at 8 p.m. in Reynolds Coliseum.

The commencement address was given by President Jo Allen, ’80. As is customary, graduates were represented by two student speakers, one undergraduate and one graduate. All of this year’s speakers incorporated references to strengths and Meredith’s “Going Strong” brand.

Whitney DesChamps spoke on behalf of the master’s candidates. DesChamps, who received her MBA, is currently employed as a Senior HR Systems Coordinator for PRA Health Sciences.

She had words of encouragement for her fellow graduates, noting that no matter the particular path they had taken to complete their journeys as graduate students, they had made it.

“Every obstacle, naysayer, and setback that was sent to block your process instead gave you the tools to progress. Graduates, we have reached this milestone for a reason, we have crossed this path together for a reason, and our presence is not in vain. Find your purpose, fulfill that purpose, and continue to show the world what Meredith Going Strong looks like.”

Class President Hannah Kicklighter, ’19, spoke on behalf of the undergraduates. She said that each student who comes to Meredith learns about her own strengths and each has a personal meaning regarding what strong means to her.

“Webster’s Dictionary defines strong as ‘marked by great physical power’ or ‘having moral or intellectual power.’ Graduates of 2019, I’m here to tell you that we have both.”

President Allen’s speech focused on the inevitable twists and turns the graduates’ lives would take – and how their Meredith education has prepared them to navigate those changes.

One of the ways that happened, she said, was through taking a strengths assessment as part of StrongPoints®, Meredith’s personal advising and coaching model.

“For many of you, that focus on strengths became a powerful twist. Our goal in encouraging your exploration of your strengths was simple:  we intended to show you a life – not of perfection – but one in which you could know your strengths and build a series of plans based on them, and using them wisely rather than focusing on your weaknesses and trying to fix them,” said Allen.

Allen noted that “twists” are a suitable metaphor for learning, because doing so requires the ability to discern between choices.

“In fact, it is tempting to see life as just one huge series of choices:  this or that, here or there, all or none. It is at moments like this commencement ceremony – this celebration of your achievement –that give you the chance to look back on your choices and to ponder what you have learned.”

She reminded the graduates that Meredith’s personal interest in each of them continues well beyond commencement, and encouraged them to stay connected to the College – to come back for reunions and special events, to share their successes, and to mentor future students who will benefit from their wisdom and experience.

“And now your journey from past, to present, to future is memorialized in this good-bye from all of us at Meredith College in this final, bittersweet twist: That even as you leave us, you are always with us.”

As the commencement ceremony drew to a close, the new graduates held up candles to symbolize the education they have received as a light each takes into the world.

This year’s ceremony was held in Reynolds Coliseum on the campus of North Carolina State University. Meredith College has held commencement exercises in an off-campus venue since 2013, when the size of the graduating classes became too large for on-campus locations. This opportunity to hold commencement at NC State is a result of Meredith’s long-standing goodwill and partnerships with the university, a fellow Cooperating Raleigh Colleges member with whom Meredith shares a dual degree engineering program.

Others will pursue graduate study at universities including the Campbell University College of Pharmacy and Health Sciences, UNC-Chapel Hill, Liberty University, Campbell Law, Edward Via College of Osteopathic Medicine Medical School, Meredith College Graduate Programs, and a Fulbright Grant to study in Mexico.

Read Strong Stories about the Class of 2019