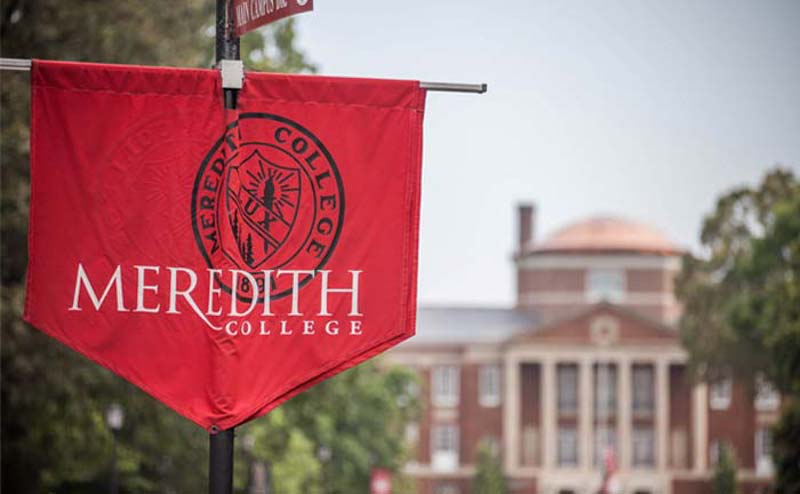 Meredith College has selected two members of its incoming Class of 2023 as recipients of the College’s top scholarships.

Safa Ahmed, of Wilson, N.C., has been awarded The Meredith Legacy Scholarship.

Ahmed is a senior at Greenfield School where she has been active as a student delegation leader in the Youth and Government Club, a varsity soccer player, and secretary of the National Art Honor Society. Her community service included serving on the Wilson Youth Council, establishing the Muslim Student Association in Wilson, and volunteering with the Wilson Public Library, Wilson Medical Hospital, and United Way World Relief in Durham. Volunteering with the Save a Youth Center afterschool program led Ahmed to organize a book drive that collected more than 500 books to establish a library for the program. At Meredith, Ahmed plans to major in psychology. Her career goal is to become a neuropsychologist.

Kendall Putnam, of Lexington, N.C., is the recipient of the Meredith College Presidential Scholarship.

Putnam is a senior at North Davidson High School where she was selected for the National Honors Society. She is active in Girl Scouts, including earning a Bronze Award and working toward the Scouts’ Gold Award. Her community service includes being the youth representative on her church’s administrative council. In high school, she has been a member of the marching band and concert band, including serving as trumpet section leader and brass captain. She has been selected for All County Band and All District Band for several consecutive years. Putnam plans to enroll in Meredith’s dual degree engineering program, through which she will earn a degree at Meredith in chemistry and a degree from NC State in engineering. She is considering pharmacy as a future career.

The selection process for both awards included an interview during Meredith’s Scholars Weekend.