Meredith Choirs Mask Up, Sing On 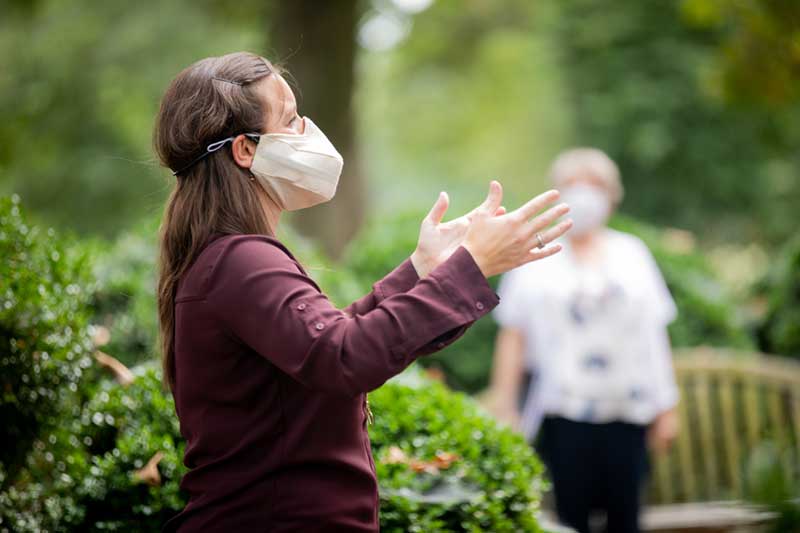 The COVID-19 pandemic has presented its own unique set of challenges to each department at Meredith, including music.

As a discipline that relies heavily on gathering in groups to perform in indoor spaces, the music faculty at Meredith have had to get creative to find ways for students to rehearse and perform in a safe and productive manner.

Director of Choral Activities and Music Education Shannon Gravelle has been instrumental in ensuring the safety and success of music students at Meredith since the pandemic started.

Gravelle has been closely following COVID-19 studies and recommendations from experts to better understand what is safe and what isn’t when it comes to singing and performing.

Currently, Meredith’s three choirs are using both indoor and outdoor rehearsal spaces, remaining masked and physically distanced. When indoors, students can only spend 30 minutes singing before they need to leave the space for at least one air change. Then, they transfer to an outdoor rehearsal where they can still only spend 30 minutes before moving to a different spot again.

This new rehearsal format drastically affects how the students are able to sing and interact with each other's voices. “Being physically distanced, it’s often harder for the students to hear both key center and rhythmic pulse across the choir, “ Gravelle explained. “And having some time rehearsing near hard surfaces is important, because then they get some sonic feedback.”

Their primary indoor rehearsing space is Jones Chapel, but it can be a difficult space to perform in because of the reverb. “Students often want to sing with the echo, and it’s tricky to pick up the tempo in various pieces of music,” said Gravelle.

She makes it a point to remind her students, “It’s not your fault. Rehearsing here is hard. But only you can fix it.”

Another change is the type and amount of music the students are performing. It’s difficult to get the same amount of work accomplished in rehearsal for a variety of reasons, so they are singing less material. In addition, Gravelle is having them sing music that is more suited for the outdoors. “This means the music I’ve selected tends to be more focused on vibrant and consistent pulse, the dynamic range is smaller, and it’s more homophonic,,” she said.

Despite the many obstacles, Gravelle said the singers remain focused and completely willing to try new things, pushing themselves to high standards.

Currently, the choir is finishing up a recording project they hope will go live sometime in October. They also just performed their first live concert on Saturday, September 26, for a small audience in the amphitheater, which was a success.

From a performance standpoint, Gravelle says that each ensemble is quite strong this semester. “Within our first few rehearsals, I could tell they were eager for more music,” she said. “The singers are supportive of each other. They want to be singing, even if it’s in this strange, modified way.”

Gravelle takes great pride in her students' resilience and success this semester. “They are rolling with it, even though it doesn’t “look” like normal,” she said. “They are pushing through the obstacles that have arisen with our new rehearsal situations, they sing with their masks even though it can be cumbersome, and they are remaining positive.”