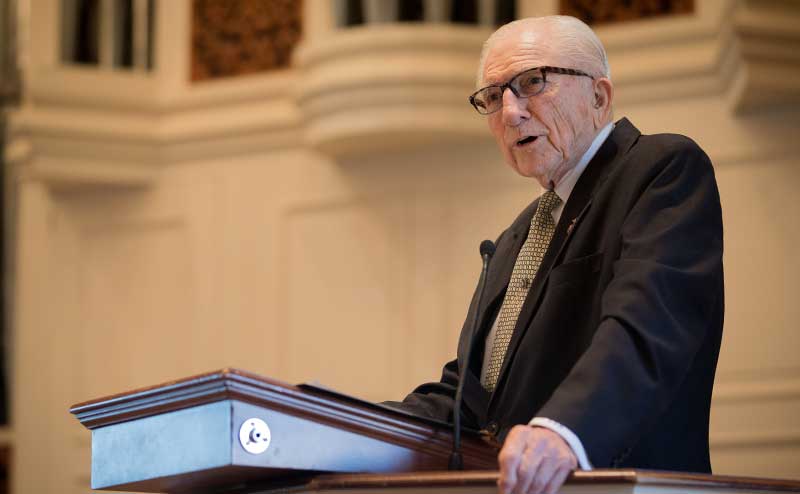 In her welcome, President Jo Allen, '80, noted that the College honors all veterans, but pays special attention to women veterans “whose service is often overlooked.” She also introduced Heilman as “Meredith’s first serious fundraiser and our first serious friend-raiser.”

Heilman, who served in World War II, said women are the fastest growing segment of veterans in the United States. There are more than 86,000 women veterans in North Carolina.

“There are additional challenges for women as society continues to assume all veterans are men,” Heilman said.

In his speech, Heilman aimed to offer those gathered some sense of what war is like, and why many veterans don’t discuss their service.

“Too few citizens know why veterans of World War II never talked about their service,” Heilman said. “Everyone, especially young people, should understand what it is like to die for your country.”

Heilman shared memories of a fellow veteran who assisted a chaplain at the Battle of Iwo Jima, saying the “reality of the battlefield is far beyond” what is depicted in film and literature ... “only our freedom is worth such a sacrifice.”

Heilman’s long career in higher education included serving as Meredith president from 1966-71. From 1971-86, he served as president of the University of Richmond, where he holds the position of chancellor.

Meredith’s Honoring Women Veterans service also included a performance by Encore! and a medley of service anthems. At the closing of the ceremony, the Enloe High School U.S. Army JROTC Drill/Exhibition Team performed in front of Johnson Hall.