February Was A Month in Blume at Meredith College 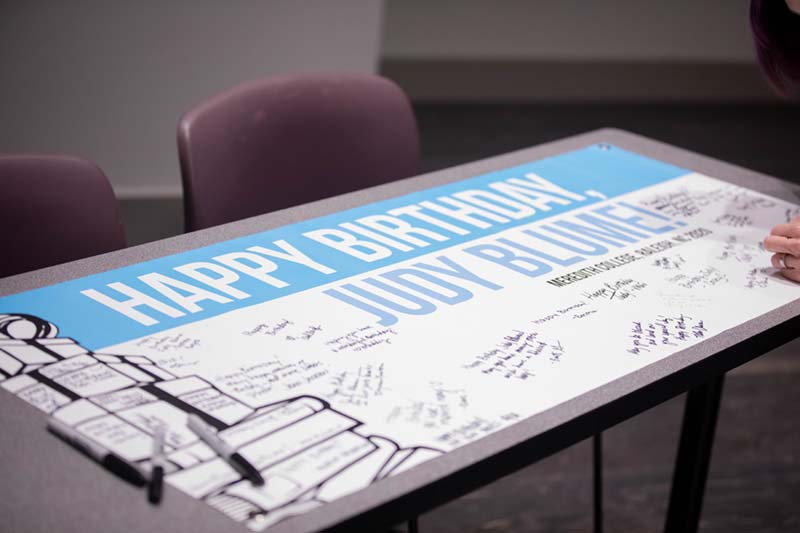 Author Judy Blume’s birthday and the 50th anniversary of one of her best known works were the reasons Meredith’s English department considered February 2020 to be “A Month in Blume.”

On Blume’s birthday, an armchair discussion “Are You There God? It’s Fifty Years Later,” was held in Jones Chapel.  The discussion was moderated by Meredith Chaplain Donna Battle and featured Meredith student Ashleigh Murr, ’20, and Pullen Memorial Baptist Church Pastor Nancy Petty. The discussion focused on the religious themes in the novel Are You There God, It’s Me Margaret. Topics included a discussion of the authentic ways the title character engages with God and how literature helps people explore their own beliefs. 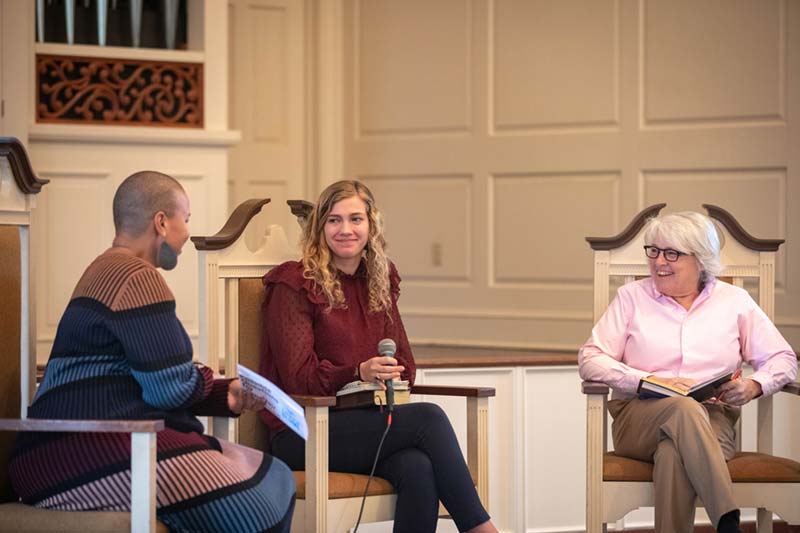 The next day, another panel featured Meredith alumnae who are authors of books for children or young adults. The Young Adult Literature panel discussion included Meredith Professor of Education Tisha Duncan, ’99, the author of My Dirty Cat Mutt and Myrtle the Blue-eyed Turtle, Jenny Hubbard, ’87, the author of YA novels Paper Covers Rock and And We Stay, and Erin Scott Rhew, ’02, the author of The Fulfillment Series: The Prophecy, The Outlanders, The Fulfillment, and The Transhuman Project. 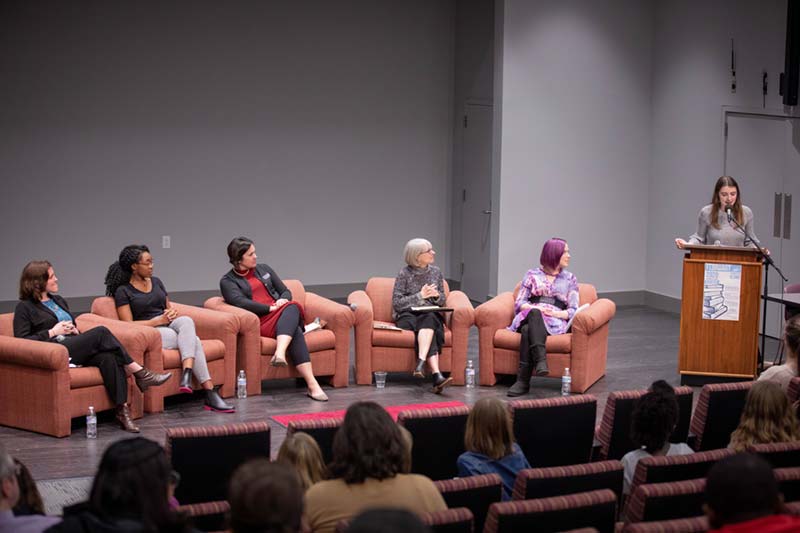 The three authors engaged in a discussion, moderated by students Alex Rouch, ’20, and Casey Corpening, ’22, about what inspired them to write, how they stay engaged with their young readers, and how Judy Blume has influenced generations of readers.

“Judy Blume was the first author who I felt shared with me who she was,” Duncan said. “Blume books help readers feel they aren’t alone.”

“She really respects young people as intelligent human beings,” Hubbard said. “She creates [characters] who are like us. They are flawed and they make mistakes. That makes us feel better about ourselves.”

Rhew agreed that Blume’s characters endure because they are relatable. “That is what makes you fall in love with them as readers.”

At both of the panel discussions, a birthday banner was available for participants to use to send greetings to Judy Blume and the audience was recorded singing Happy birthday for her.

Professor of English Kelly Roberts, who teaches Meredith’s Young Adult Literature course, organized this celebration with the support of a steering committee of students and alumnae.

Other Events
Throughout the month, a Rock N Read fundraiser was held each day in February from 1 p.m. – 2 p.m. in Carlyle Campbell Library. Participants were invited to read for the hour in rocking chairs and are encouraged to leave a new or gently used book or monetary donations to contribute to the Wake Up and Reads Book Drive for Wake County schools. More than 100 books were donated through the fundraiser, which featured over 20 faculty, staff, and even a Dodo as celebrity rockers. Approximately 75 students rocked throughout the month.

An interactive art installation called the Typewriter Project was in first floor Cate Center from February 10-14.  This installation, inspired by the nationally-renowned Typewriter Project, utilized an old-fashioned typewriter where participants could anonymously post their responses to one of three writing prompts focused on children’s and young adult literature. The more than 50 submissions that resulted from the installation have been posted on a section of the Carlyle Campbell Library website that was created by Young Adult Literature students for The Month in Blume., with support from library staff. The site also includes more information about the author and issues relating to her work.