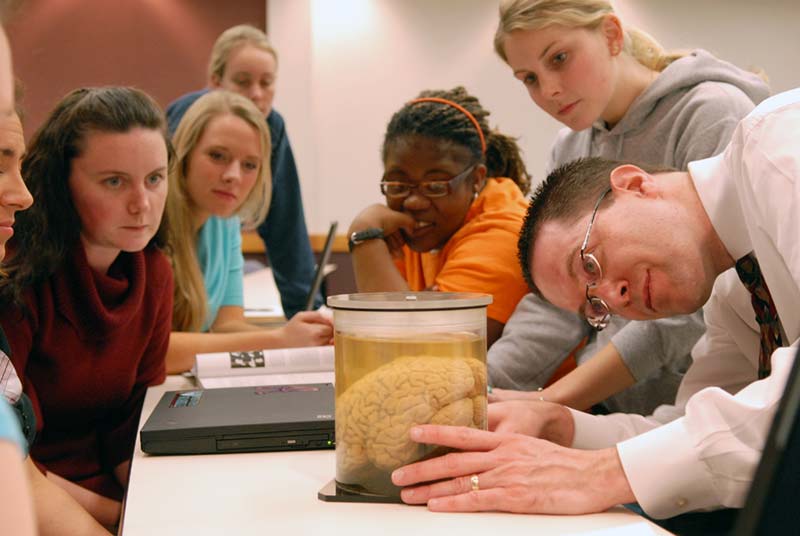 When Mark O’Dekirk, professor of psychology at Meredith College, was a junior in college, he struggled to find meaning in his studies. He was majoring in engineering, a subject he was not passionate about, and as a result his grades were suffering.

Nearing the end of a particularly difficult calculus course, O’Dekirk reached out to a professor in hopes of receiving some grade-saving guidance. His professor gave him a curt piece of advice before walking off to his next appointment: “Make a supreme effort to make an ‘A’ on the final.” The advice he received that day resonated with O’Dekirk and would shape his philosophy as a future professor.

“I didn’t want to ever be that teacher who turns their back on a student and walks away,” said O’Dekirk. “Whoever you are when you walk through my door, that’s where I meet you. And I do everything in my power to get you to where I need you to be when you finish. That’s very important to me – that level of support.”

Shortly after that meeting with his professor, O’Dekirk took an Introduction to Psychology course, which became the first class he loved in college. Knowing he had found a subject he could be passionate about, he changed his major, and his motivation and academic performance improved. O’Dekirk graduated from North Carolina State University with a B.A. in psychology, but not before developing an interest in experimental psychology. His newfound interest led him to the University of Alabama, where he discovered his other passion: teaching.

“That was the first time in my life I’d ever taught, and I found that I really liked teaching and being able to provide support and encouragement,” said O’Dekirk. “I had to fight a little bit to teach, because I was at a big university, and they expected me to be focusing on research, but that didn’t motivate me. Instead, I was up ‘till all hours in the morning, typing up lecture notes, because that was what I enjoyed.”

Despite his preference for teaching, O’Dekirk did conduct research in graduate school. His primary area of focus was the visual selective attention of individuals with intellectual disabilities versus that of individuals who are considered “typically developing.” He graduated from the University of Alabama with an M.A. and a Ph.D. in experimental psychology and was already working as an adjunct professor at Meredith when he completed his Ph.D.

At Meredith, O’Dekirk fell in love with the unique and supportive atmosphere of the College, which allowed him to get to know his students personally and see them grow and find their voice. Over time, he dedicated most of his time to teaching and advising students in research.

O’Dekirk found that research was more motivating and meaningful when he worked with students. In fact, his first study out of graduate school was conducted with Meredith students after September 11, 2001. The group tested accuracy and confidence in particularly vivid memories (known in psychology as “flashbulb memories”), and found that people remembered with less accuracy over time, but their confidence in the accuracy of memories increased.

“Over the years I’ve found myself more drawn to individual student projects, because I’m open to anything that comes in the door,” said O’Dekirk. “It’s been really fun and invigorating, because you have a nice variety of different projects every year.”

O’Dekirk’s philosophy to never turn his back on a student holds true to this day. For his significant contributions toward the advocacy, support, encouragement, and success of students with disabilities, O’Dekirk was awarded the Access Award by the Disabilities Panel in 2005. His office, decorated with family pictures and gifted hand drawings from Star Trek and Doctor Who — among other interests — is a welcoming space for all students.

Drawing on inspiration provided by the support from his family and the resilience of his students, O’Dekirk optimistically sees the future as a work in progress and works to always improve as a teacher.

“I’m always striving to get better at big things and even little things in class,” said O’Dekirk. “When they’ve left class, I want students to feel like they’ve learned a lot and that they had a lot of fun in the process.”