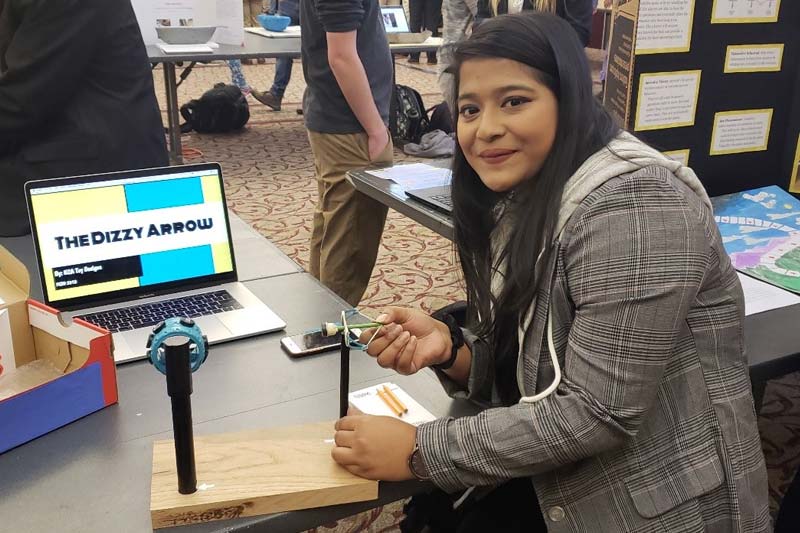 Khanam and her team placed third in the toy design competition for their creation of “The Dizzy Arrow,” a toy that consisted of a spinning wheel, a bow, and an arrow. The wheel had seven magnets attached to it with each magnet having a different point value. The object of the game is to use the bow to aim the arrow towards the wheel and shoot to target the magnet worth the highest number of points.

“I enjoyed doing the project,” said Khanam. “I think we came up with five or six plans, and at the end, we chose the arrow game. From this project especially, I learned leadership skills, designing, and engineering basics.”

With a budget of $40, the team had to design and construct a toy that was appropriate for children five to 12 years old and meet a learning objective appropriate for the specified age of the child. 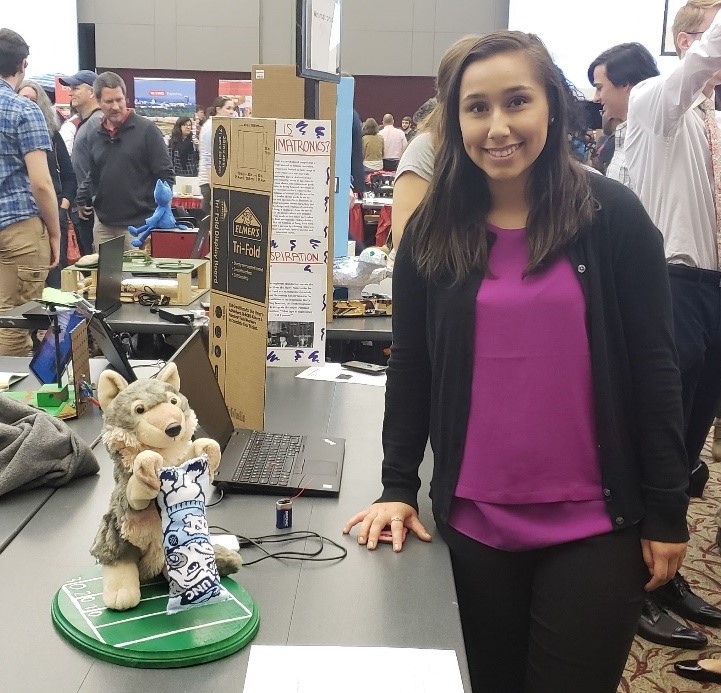 Cruz and her team placed fourth and received honorable mention for their animatronic creation of a wolf that would “slam” a UNC ram on a football field. The goal was to create an animatronic that moved on its own, fit in a 0.5 meter by 0.5 meter box, and was created on a $40 budget.

“It was really exciting to get honorable mention because as my group was going through the design and building process, we

were very nervous whether the animatronic would work or turn out as we imagined,” said Cruz. “It turned out really well and to get honorable mention was a great success for our hard work.”

Potok and her team received honorable mention for their concrete canoe. The canoe had to be constructed completely out of concrete, be within the dimensions of 18 inches long, six inches wide, and five inches high, while having a V-shaped cross section. It also had to float in water and carry a load of marbles. Potok and her team constructed a canoe that carried a payload of 3.3 pounds of marbles.

“I learned that it is beneficial to construct several prototypes and that it is ok to have prototypes that look and feel very different from each other, which allowed us to improve our fabrication process each time,” said Potok.

Bahena Bustos was on a team that designed and created a mechanical music maker that played Hot Cross Buns and was designed to resemble an oven. Pegram and her team created a bubble machine that was powered by wind and produced a continuous stream of bubbles for at least a minute. Santos Xotenco and her team used a 3D printer to create a device that could attach to a beach umbrella, big enough to hold two drinks in a cup holder and small objects or books within a compartment. Sayeed’s team designed an automatic chicken coop door opener that lifted 12 inches.

“I enjoyed collaborating with my teammates, and everyone made an effort to contribute to the project in one way or another,” said Santos Xotenco.