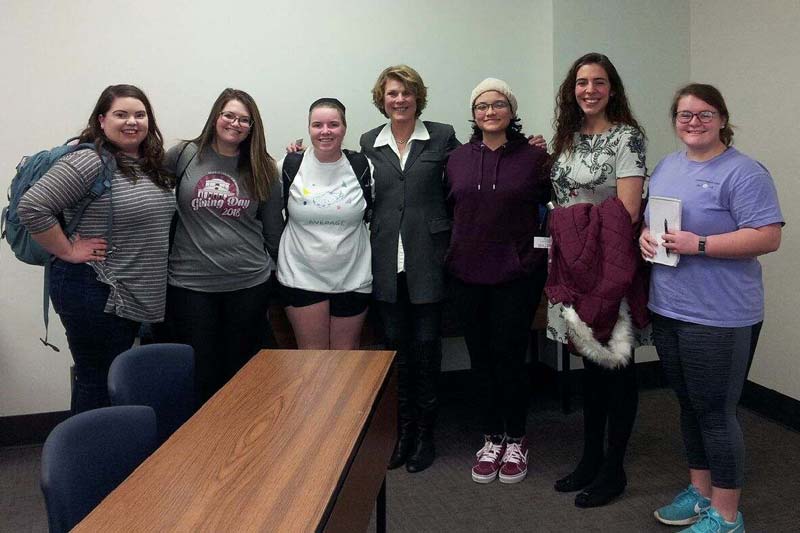 Meredith College’s Department of Communication hosted Emmy award-winning alumna Brenda Hughes, ’70, on Monday, February 25, as a part of Communication (COM) Week. Hughes’ lecture, “A Workshop on Visual Storytelling,” focused on the step-by-step process she went through to make one of her Regional Emmy Award-winning documentaries, Thank You Eddie Hart.

Hughes has experience as a news and sports reporter, TV anchor, documentarian, creator, photographer, and editor. For more than 20 years, she’s been producing independent documentaries and productions for UNC-TV through Wet Bird Productions. Most recently, she launched actTwo Stories, where she produces mini-documentaries of inspiring people creating second chapters in their lives.

During her workshop, Hughes gave a thorough recount of the steps that were taken to make the documentary a success. She was part of a three-person crew that travelled around North Carolina and through various countries in Europe in order to film in authentic locations vital to Hart’s story.

Aside from the video and editing process, Hughes talked with students about the writing process that went along with the documentary. She believes it was one of the most stressful pieces she has had to put together because of all the detail that went into researching historical facts.

“I wanted to make certain I told the story accurately,” said Hughes. “You have to be invested and pay attention to every detail, no matter how small. It’s not enough to just ‘do’ a project like this.”

For Brianna Bean, ’19, being able to hear the process of creating the documentary drew her in. “As a sociology major, I was interested in seeing how Brenda was able to incorporate social awareness through a creative lens,” said Bean.

Hughes tried to emphasize the importance of always being open to new opportunities. “You never know where you’ll find a good story, so always be prepared to discover something big,” said Hughes.

She continually drove the point home that planning is key and never putting limitations on what a person is capable of is crucial for success. “Be bold and never take no for an answer,” said Hughes.

Allie Sullivan, ’19, was inspired by the message Hughes presented to students. “When you find something that captivates you, like a story or a career path, you should really go for it,” said Sullivan. “The process may be expensive or slow, but eventually your hard work will pay off.”

Bean had similar sentiments following the lecture. “Perseverance and drive are two big take away points,” said Bean. “If I have a burning desire to tell a story, then I need to do it by any means necessary.”