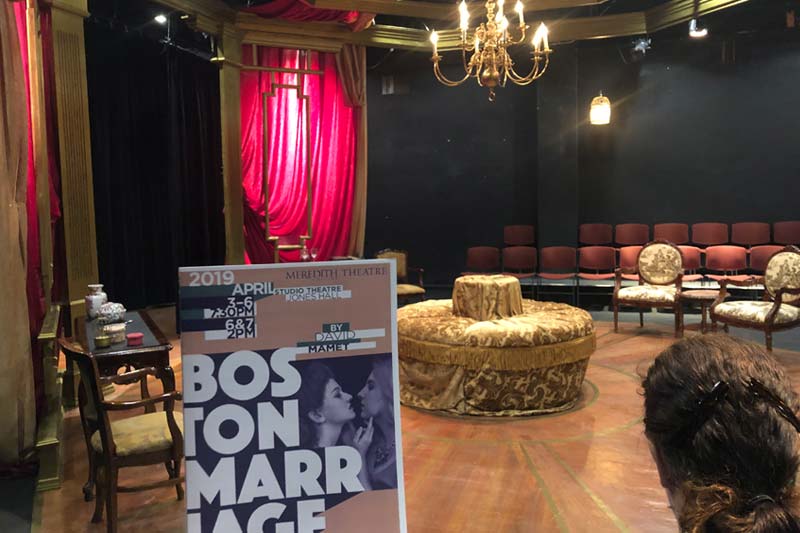 Meredith College Department of Theatre performed Boston Marriage April 3-7 for their final production of the 2018-19 season. The show, which had a cast of three, was complex to perform but very rewarding for the actors.

Hannah Johns, ’19, Laura Austin, ’21, and Hannah Hudson, ’22, were the leading ladies in the performance and found their roles to be challenging, yet very rewarding.

Johns played the role of Anna, a woman having an affair with a married man. Anna prefers the company of women over men and had a past relationship with Claire. Austin played the role of Claire, who is infatuated with a much younger woman and goes to Anna in hopes that she can arrange a meeting between herself and her new lover.

Catherine, who was portrayed by Hudson, is Anna’s housekeeper. She offers comic relief throughout the play. For Hudson, being able to learn more about her character was an essential part of the process for putting on a successful show.

“I was constantly making discoveries about Catherine throughout this process,” said Hudson. “My biggest obstacle was getting the Scottish accent to sound real and natural. It took a while for it to feel normal, but once I got it I really felt like I became Catherine.”

For Johns, the process of memorization was a difficult task to tackle, but her hard work and dedication paid off with a stunning performance.

“This is my tenth show at Meredith and I believe my twenty-fifth production ever, and it was the most challenging memorization I’ve ever had,” said Johns. “I think this is the best production we’ve done in my time at Meredith. Overall, everything worked together seamlessly.”

Austin found the ambiguity in the script accompanied with the structure of the stage to be the most challenging aspects for her when preparing for her performance.

“The staging was so specific, making the blocking a huge challenge, and the script left a lot of questions to be answered that we had to figure out on our own,” said Austin.

Austin was even able to acquire a new and very amusing skill. She perfected the action of  spitting water on stage through the portrayal of her character. “My favorite moment in the show was getting to do a spit take. It was a fun part of the story and a really neat skill to gain.

Other than time restraints, none of these actresses would have changed anything during the show. Their commitment to themselves, each other, and their characters was made evident through the portrayals and the success of the show.

“There is nothing I would change in this performance,” said Austin.“The production was really successful. Everyone put in a lot of work and it came out amazing. I am proud of us.”