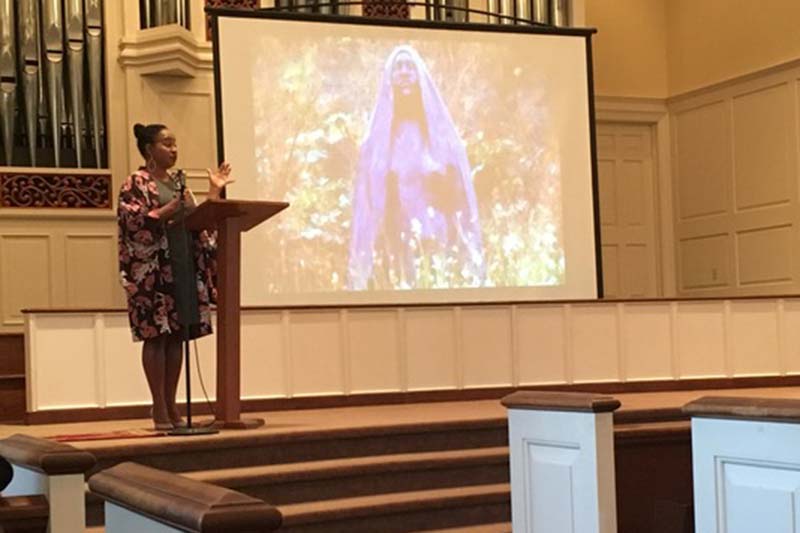 Members of the Meredith College community gathered in Jones Chapel on March 19-20 for a lecture and conversation with biblical scholar Nyasha Junior. Her presentation was titled “Sarah, Hagar & #MeToo,” and focused on the biblical text of the story and how the roles of Sarah, Hagar, and Abraham tie into the #MeToo movement of today.

Nyasha Junior is an associate professor of religion at Temple University, and holds a Ph.D. in biblical studies from Princeton Theological Seminary. Junior is the author of An Introduction to Womanist Biblical Interpretation, Reimagining Hagar: Blackness and Bible, and Black Samson: The Untold Story of an American Icon. She also holds a Master of Public Administration from Princeton University and a Master of Divinity from Pacific School of Religion. She received her undergraduate degree in foreign service from Georgetown.

“I have four different degrees in different fields – this is not the path I imagined for myself as an undergraduate student,” said Junior. “My undergraduate background was invaluable. It’s not really about the specific major. I learned to read, to write, to think, and to be curious.”

Junior paired her talk with the School of Arts and Humanities’ theme of “Women Warriors” and how it can appear in different forms. “When you think of warrior women, Hagar may not be someone who is at the top of our list of biblical women,” said Junior. “We may expect that warriors look a particular way, fight a particular way, and even win in a particular way. But to be a warrior is not just about the fight. Sometimes as a warrior, the fight is just to live to fight another day.”

Kirby Jones, ’19, an English major, attended the lecture because she found the story of Sarah and Hagar interesting. “I’ve been visiting and revisiting this story over the course of four years, and I was thrilled for the opportunity to come hear an expert on the subject speak in regard to how it connects to modern women’s issues.”

Valerie Kutter, ’20, found the title engaging. “I had not heard the interpretation that Hagar was not a willing participant in this exchange,” she said. “And I wanted to expand my knowledge on the subject.”

Associate Professor of Religious and Ethical Studies Steven Benko found the event beneficial for students. “It was a very nice and challenging event, which is what we want to have on our campus for our students,” he said. “Even while it was stimulating, it was professional and friendly. With this, we continue our tradition of modeling what good, strong, critical inquiry looks like at Meredith.”

On Wednesday morning, Junior and Meredith Chaplain Donna Battle had a conversation about Junior’s work as an academic, womanism, and her path. Junior, who grew up in Florida, described her family life and how they spent a lot of time in church. Her family members were ushers, in the pulpit, and in the choir.

The death of her grandmother caused Junior to pause and think about what she was doing with her life. “Part of figuring out the next thing was getting quiet enough to listen,” said Junior. “To ask myself, ‘Are you happy?’ ‘Are you doing what you want to do?’ A lot of my life has been doing what other people are not doing.” This led her to choose a Master of Divinity program.

Junior discussed the reasons and purpose behind some of her books. Womanism is a common theme found in her writing and comes from Alice Walker, an American novelist, poet, activist, and author of The Color Purple. Junior said, “The lengthy definition is often reduced to ‘a womanist is a black feminist or womanist is to feminist as purple is to lavender.’”

Battle said what she appreciated about womanism was “what is so beautiful about this, is the freedom, that there is no solid definition.” She described how understanding others’ perspectives and respecting them is what makes community.

Junior was appreciative of the reception she received, and how students were open to a complex topic. “I had a good visit – everyone was extraordinarily hospitable,” said Junior. “Students have been very open and receptive. My talk was intentionally provocative but students have expressed a willingness to think about texts differently. It’s rewarding for me as a teacher because that’s what I’m interested in doing – creating a spark of curiosity.”

Junior’s visit was part of the the Mary Frances Preston Lecture, which is sponsored by the religious and ethical studies department. The lecture is funded by Charles and Peggy Barham, in honor of Mary Frances Johnson Preston, who were in the audience Tuesday evening.