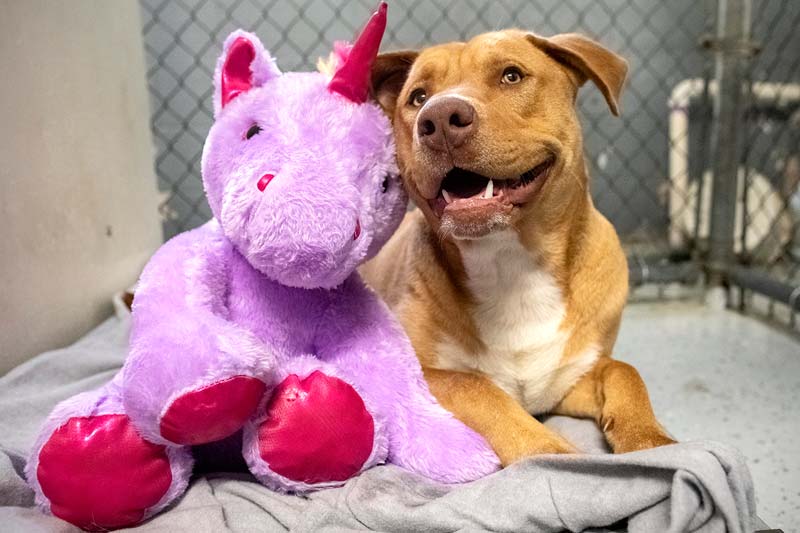 Meredith College Professor of Art Shannon Johnstone played a role in a recent story that went viral on social media and was featured in numerous media outlets.

“The photographs feature Sisu, a stray dog in Duplin County who broke into a Dollar General store five times to steal the same purple unicorn,” Johnstone explained. “Not others like it nearby, but the same exact one. Animal Control was called and the officer bought the stuffed animal for the dog before bringing him to the shelter.” 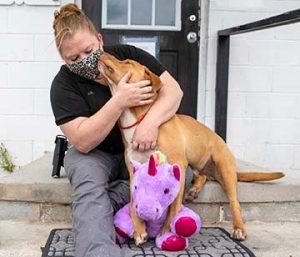 Johnstone’s photographs of “Sisu and the purple unicorn” were shared tens of thousands of times over Facebook, Instagram, and Twitter. Her photos were also published by media outlets including People.com, NBC’s Today show, HuffPost, and local news stations.

After some initial local media coverage of Sisu’s story, Johnstone traveled to the shelter to take pictures of him with the officer and the toy.

“My husband shared The News and Observer article with me and I was touched by the story. First, I love the fact that the animal control officer (ACO) is the hero in this story,” Johnstone said. “ACOs are so often portrayed in a negative light—as an imprisoner, punisher, and even sometimes, executioner. This is so unfair because ACOs and animal shelter workers are really first responders in the line of animal welfare. Their job is to ensure health and safety for both animals and humans.”

Johnstone loved that this story helped to change the narrative and shined light on some of the more compassionate aspects of the ACO job.

She was also moved by the dog’s fixation on a particular toy.

“Sisu went back into the store five times for that particular purple unicorn. Not others like it nearby, but that specific toy. He was waiting in the Dollar General parking lot trying to get back into the store when ACO picked him up,” Johnstone said. “I am fascinated by what he must have been thinking and feeling. This expression of determination, stubbornness, and the specificity of desire made me think Sisu is quite a special dog and I really wanted to meet him.”

Sisu was adopted not long after his photoshoot. Johnstone hopes that the viral photos and Sisu’s story inspire people to adopt from their local shelters. She also thinks Sisu’s example brings attention to animals and their individuality.

“I hope the photos help people to consider how much more complex dogs, and all non-humans, are than we give them credit for,” Johnstone said. “They have particular likes, dislikes, complicated emotions, and specific things that comfort them and make them happy—just like humans.”

Johnstone has long used her art to bring attention to shelter pets through her Landfill Dogs project and she had previously worked with the Duplin County Animal Shelter as part of the “North Carolina Rural Shelter Project.”

“I also served as an evidence photographer for a puppy mill bust they did several years ago, so when I emailed them about coming out to photograph that day, they were very welcoming,” Johnstone said.

This visit to Duplin County Animal Shelter won’t be the last for Johnstone, who also photographed other animals available for adoption there. She plans to return on a more regular basis to continue helping bring attention to the shelter.

“I am so glad Duplin County Animal Shelter is getting this positive press with Sisu’s story. They do so much good in their community and they have so little. Their shelter is on a graveyard—a literal graveyard,” Johnstone said. “Right now they are trying to raise money for a new building, and my hope is that I can continue to work with them and share photographs and assist in some small way to help them achieve their goals.”