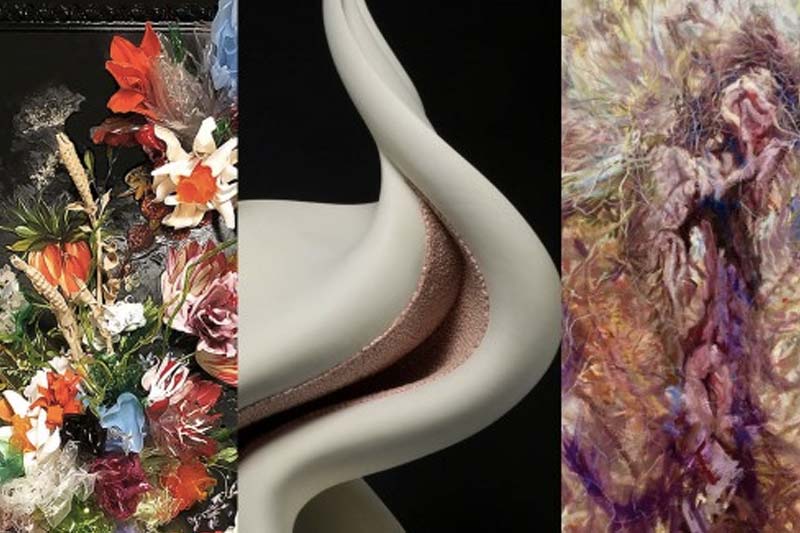 Flora fem Fauna will be on view at Meredith College’s Weems Gallery from January 30 - February 25, 2020.

With every line, stroke, pull, or pinch, the artists of Flora fem Fauna question commonly held cultural preconceptions of gender roles and address gender equity. Each presents iconic, sacred forms that upon closer scrutiny tempt the viewer into an awareness of false perceptions. The common aim of their work is to celebrate female sexuality through knowledge and body positivity of female anatomy as a form of empowerment. Using a varied visual vocabulary, they use nature as a metaphor for gender fluidity, adhering to a feminist agenda and creating a space for intersectional dialogue and response.

This body of work demonstrates the development of a feminine collective consciousness with a singular goal, the determination to overcome destructive patterns of our society by raising awareness and starting conversations through art activism.

Jenny Eggleston
Jenny Eggleston is a visual artist, poet, and teacher. Her work is often inspired by nature--and its many forms and feminisms — to create mindscapes that are emotive, sensual, sometimes disturbing, and quirky. Eggleston often titles her works with poems, moving between the expressions in a separate but co-creative act. Her recent work responds to concrete scenes of shame, silencing, and taboo, with a surreal and unafraid imagination. She is an advocate for reproductive justice, full dismantling of rape culture, and equitable health care for all.

Eggleston has exhibited throughout North Carolina and Virginia. Her work has been shown at the Weatherspoon Art Museum in Greensboro, the Muscarelle Museum of Art in Williamsburg and most recently at the Rubenstien Arts Center at Duke University.  She is the owner of Egg in Nest Art Studio, a private art studio providing instruction in drawing, painting, and art appreciation. She received her Bachelor of Arts from the College of William and Mary, and her graduate studies were at Virginia Commonwealth University. She also studied abroad through the University of Georgia.

Kiki Farish
Kiki Farish, known for her emotive pencil paintings, conjures moments of clarity amid the ambiguity of grays. The youngest of four siblings raised in Florida, during the 1960s, she was aware of the Cuban Missile Crisis. She wears an elementary school dog tag, a reminder that life is fleeting. Farish has received the NC Arts Council Fellowship, artist residencies, at Jentel, WY; New York Mills Artist Residency, MN; and Penland Winter Residencies, NC. The City of Raleigh commissioned a video statement for Artist Block Series: Kiki Farish which can be viewed on YouTube. Other venues for her work include the North Carolina Museum of Art, the Southeastern Contemporary Museum of Art (Winston-Salem), Artspace (Raleigh), GreenHill (Greensboro) and the Greenville Museum of Art (Greenville). She received an MFA from East Carolina University (Greenville) in painting and drawing and serves as an adjunct professor at Meredith College (Raleigh). Farish has work in the permanent collections of the Ackland Art Museum, the Raleigh and Rocky Mount Municipal Art Collections, and Fidelity Investments. She has a studio at Artspace and teaches at Meredith College in Raleigh, N.C.

Holly Fischer
Holly Fischer is known for her abstracted figurative sculptures in white clay that celebrate voluptuous flesh and female empowerment. These works explore dualities inherent in femininity, encouraging a social engagement with gender politics by questioning stereotypes and challenging the traditionally assumed structure of the gaze.  Fischer has a vigorous studio practice and a full exhibition schedule.  She enjoys investigating a variety of processes and materials, though her primary love is for ceramics. ​ Fischer received her MFA in Studio Art, University of Texas at Austin, and a BA in Studio Art, Summa Cum Laude, Meredith College, Raleigh, N.C.  She is an Assistant Professor of Studio Art and the Coordinator of the Ceramics Studio at Meredith College.  She is a passionate mentor and derives great joy from the opportunity to help emerging artists discover their own creative voice.

Stacy Bloom Rexrode:
Rexrode is a multidisciplinary artist whose practice typifies the underrepresented, discarded, disregarded, and domestic and alludes to the destructive patterns of human behavior. She received her B.A. from Dickinson College and her MFA from The University of North Carolina at Greensboro. Rexrode completed a residency at the Vermont Studio Center on an artist’s merit grant. She was the recipient of the Ella Fountain Pratt Emerging Artist Grant in 2017-18 and was a Dedalus Foundation MFA Fellowship and International Sculpture Center Student Award Nominee. Her work has been reviewed by publications such as BURNAWAY and ArtsATL and was featured in a BURNAWAY article Studio Visit: Stacy Bloom Rexrode in Greensboro by Shana Dumont Garr. Rexrode currently resides in Chapel Hill, NC and has exhibited nationally, including the North Carolina Museum of Art, Raleigh, NC; Mint Museum UPTOWN, Charlotte, NC; ArtFields, Lake City, SC; Weatherspoon Art Museum, Greensboro, NC; Greenville Museum of Art, Greenville, NC; Colorado State University, Fort Collins, CO; SouthFirst Gallery, Brooklyn, NY and Art in Odd Places: Greensboro. She is currently the Curator of Exhibitions and Collections with the City of Raleigh.