A Social Worker’s Perspective on Feminism 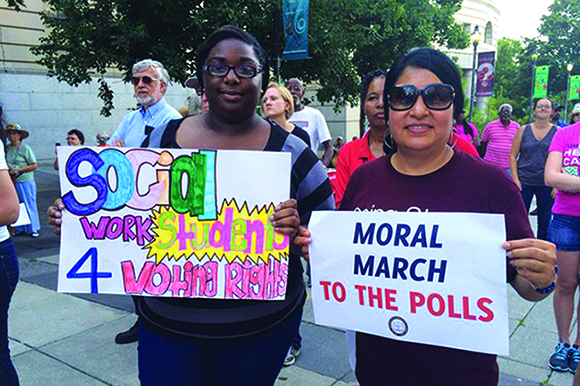 Feminism is an expansive and evolving concept. It is simultaneously a world view and a movement for justice. As a feminist and a social worker, I look to the National Association of Social Workers’ Code of Ethics for guidance. Our code affirms that as members of an advocacy-based discipline, social workers must engage in political action with members of oppressed groups and pursue social change. Thus, as a social worker, I view feminism as a lens through which to see the world, as well as a tool to uphold my personal and professional ethics.

Feminism sprang out of a realization that women are often oppressed, marginalized, and invisible in our society. However, thanks to the valuable contributions of feminists of color such as Kimberlé Williams Crenshaw, we are beginning to recognize the complex and overlapping nature of identity. Thus, we realize we must do more than seek equality for women in a patriarchal world. We must also actively work to dismantle racism, heterosexism, ableism, classism, and religious oppression.

The wisdom and teachings of feminists of color vividly reflect the words of Dr. Martin Luther King, Jr.: “Injustice anywhere is a threat to justice everywhere. We are caught in an inescapable network of mutuality, tied in a single garment of destiny. Whatever affects one directly, affects all indirectly.” Therefore, we cannot pretend to protect women if we cannot protect all women equally. For example, if we cannot prevent Dreamers (people brought to the United States as children and raised here as integral members of the American social fabric) from losing their right to work and live in the only land they’ve ever known, then our efforts as feminists are in vain.

Not only do feminists need to embrace all women, but also all men. Contrary to popular belief, feminists do not hate men. Feminists abhor patriarchy and oppression. This is a crucial distinction. In fact, feminists love many men: sons, partners, fathers, and teachers. As the mother of a young son, I know our society’s divisive beliefs regarding race, gender identity, and sexual orientation will be a detriment to his well-being, as well as my own, if we do not consciously challenge and replace them.

The best description of feminism I have heard is that feminists are not trying to even the playing field; we are trying to create a whole new game. Feminists desire a world in which we are intentional in our efforts to be inclusive of difference. We seek to create power with others, not over them, in order to develop new opportunities that can be made available to the most vulnerable among us. Feminists understand that justice demands equality of rights and equity of resources.

And so, I urge you to ask yourself if you want to live in a world of inequality, or if you want to work together to create a compassionate, cooperative, and just world. If your answer is the latter, then you just might be … a feminist.

Joy Learman, Ph.D., is an assistant professor and the director of the Social Work Program at Meredith College. She finished her doctoral studies at the University of Texas at Austin where her research explored the role of gender-based violence and inequality on women’s sexual and reproductive health. Learman currently teaches courses on social justice, social welfare policy, and social work practice with macro systems.