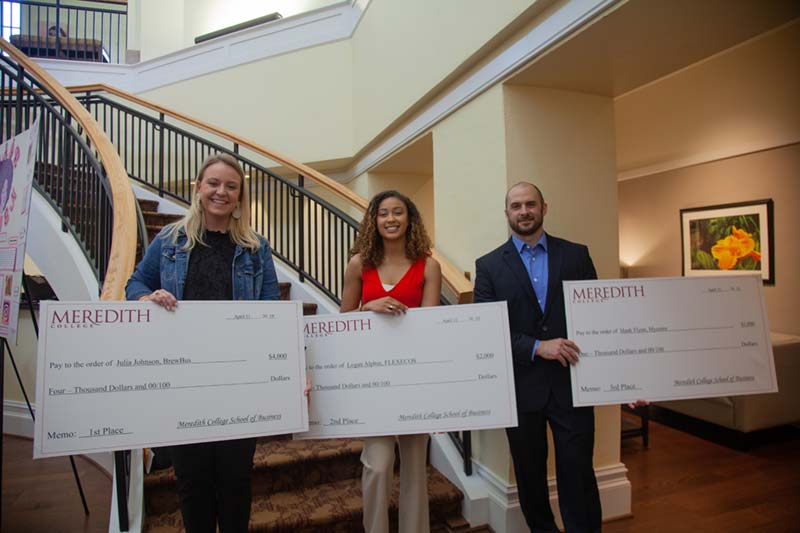 Winners of the 2019 Meredith Social Entrepreneurship Challenge (MSEC), a semester-long competition and learning opportunity for students with business ideas, were recently announced.

The competition is open to any Meredith undergraduate or graduate student, not just students majoring in business.

Julia Johnson, ’20, a psychology major, won for her Brew Bus idea. Johnson decided to participate in the challenge for the learning experience while in an entrepreneurship course called Leadership, Innovation, and Social Responsibility. Her winning idea brings together microbreweries and the food truck model, allowing customers to have products from a variety of breweries at one event.

While Brew Bus remains just a concept for now, Johnson said winning the competition has made the business idea more of a possibility. She plans to attend graduate school in industrial/organizational psychology, but is now considering starting her Brew Bus business in the future. 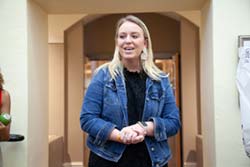 “I learned from participating in the MSEC that you do not have to be a traditional candidate to be successful in it,” Johnson said. “Listening to others, accepting constructive criticism, trusting your gut, and ultimately standing by what you’ve produced are all important aspects to being successful.”

The MSEC began in February with an optional Elevator Pitch competition, which helped students sharpen their business idea before submitting their challenge entry. In March, semi-finalists were selected, and these competitors took part in a Speedpitch Workshop and a Shark Tank style presentation in front of a panel of women business owners who served as judges.

“The competition provides prospective entrepreneurs with an opportunity to develop an idea while interacting with Meredith alumnae business owners in a very meaningful and unique mentorship,” said Nathan Woolard, Meredith’s director of entrepreneurial programs. “We were pleased to have 14 different alumnae business owners to provide their time and expertise this year."

Johnson said the Shark Tank phase was her favorite, even though she felt nervous beforehand. “It was an amazing experience to finally see Brew Bus come to life not only for me, but also for the judges,” Johnson said. “I received the best feedback during the Q&A portion, and was given great advice, both for Brew Bus and as a woman entrepreneur, that I will forever value.”

All semi-finalists were able to share their business ideas via poster presentations during the Community Showcase, held in April. Johnson won $4,000 for first place.

Second place went to Logan Alphin, ’19, for her Flexecos concept, which she described as “a product that allows people to keep their medication at the exact temperature of effectiveness through an active cooling process. This makes it easier for people using specialty medication to travel.” Second place earned a $2,000 prize.

Third place, with a $1,000 prize, went to Hank Flynn, a pre-health post baccalaureate certificate student. Flynn’s entry was Myceres, a non-profit organization that would develop and use genetically modified baker's yeast strains to treat and prevent global micronutrient deficiencies.

The next MSEC will launch in Spring 2020.