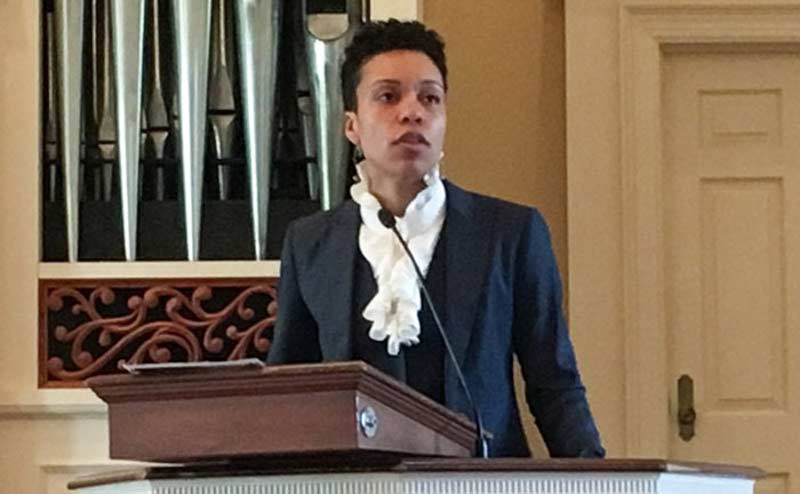 Meredith College held a commemoration service in honor of Dr. Martin Luther King, Jr., on Wednesday, January 18, 2017. The event was co-sponsored by the Office of the Chaplain and Meredith’s Black Student Union.

Rev. Chalice Overy, director of ministries at Baptist Grove Church, was the featured speaker. Her remarks focused on the price of peace, building on this quotation from Martin Luther King, Jr.: “True peace is not merely the absence of tension, but the presence of justice.”

“If we are truly to honor Dr. King, we need to be clear on what he stood for,” Overy said.

The absence of tension can mean there is an effective system of oppression in place, rather than true peace, Overy said.

“Dr. King referred to oppression as a mountain of despair. He felt certain the mountain could be moved … because equality is a moral issue,” Overy said. “Jesus and King remind us that justice that leads to true peace can cause tension.”

Members of Meredith’s Black Student Union presented the invocation, led the reading of a litany made up of quotes from women leaders of the civil rights movement, and read the day’s scripture. Solo music was provided by Shaw University student Preston Poole.

Closing remarks were given by Vice President for College Programs Jean Jackson, who spoke of Dr. King’s “courage, power, and powerful delivery of his message” while encouraging those gathered to look at his example for ways to continue the effort to achieve equality.

Chaplain Donna Battle then recognized the event organizers, guest speakers, and performers, before the service ended with the singing of We Shall Overcome.