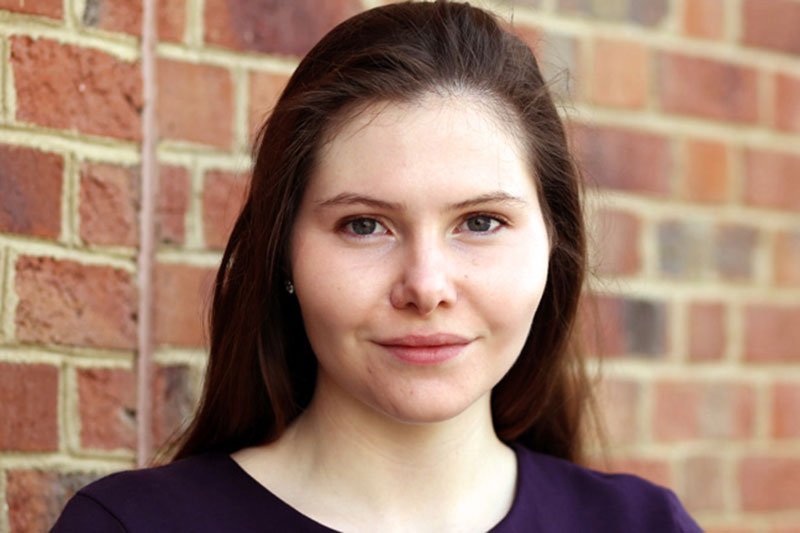 Whitney Bell, ’17, knows how to maximize her potential. After almost four years at Meredith College, the senior biology major and North Carolina native is a White Iris Circle member, the co-vice president of Kappa Nu Sigma academic honor society, the treasurer of Tri-Beta (Biology Honor Society), and an adult and transfer student adviser.

But that’s not all. Whitney is also a study abroad peer ambassador, an Honors committee member, an Impact Raleigh Scholar, and an Alpha Lambda Delta Academic Honor Society member. She is also a double minor in Spanish and chemistry

There were many factors that contributed to Whitney ultimately deciding to attend Meredith, such as the small class sizes, the close proximity to home, and the diverse resources that have helped her grow as a person. “As soon as I visited Meredith, I immediately knew that this was an environment that would be conducive to my development as both a student and an individual,” said Whitney.

Whitney’s no stranger to overcoming hardship -- she survived an earthquake while studying abroad in Ecuador in the spring of 2016.

“I was walking with some of my friends from my travel group on the beach and all of a sudden the ground started moving in these massive waves, said Whitney. “When it finally stopped, the town we were staying in had been completely destroyed.”

Fortunately, Whitney and her travel group made it back to the U.S. uninjured, and she says that Meredith was there for her every step of the way. “Not only did I receive incredible support from the office of study abroad, but I got calls from professors who weren’t even in my department who wanted to make sure I was okay,” said Whitney.

After graduation, she plans to attend graduate school and earn her Ph.D. with hopes of going into cancer research. “My internship at the National Institute of Environmental Health Science really cemented my decision to pursue a career in cancer research,” said Whitney, “I want to study current cancer treatments and learn how to make them more effective.”

Whitney is thankful for the strong community of Meredith women who have empowered and uplifted her throughout her academic career. “I haven’t always been very confident in myself, but I’ve been fortunate enough to have a strong support system of mentors, peers, and friends at Meredith,” said Whitney. “Seeing them believe in me has made me believe in myself.”