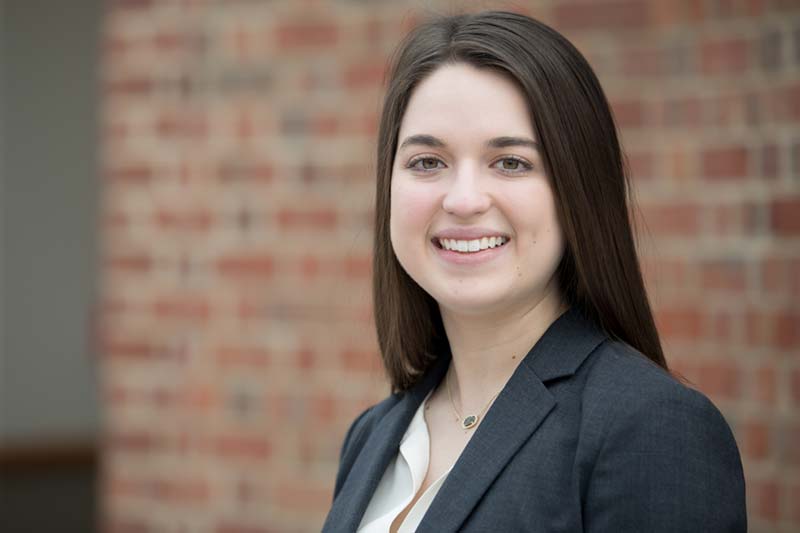 In just three years at Meredith College, Victoria (Tori) Edwards, ’18, has accepted challenges inside and outside the classroom, while discovering a passion for quality healthcare and her desire for advocacy.

“When I arrived in 2015, I didn’t know what I wanted my major to be. I described my interests to an academic adviser who pointed me toward the field of public health, which has been a perfect fit for me,” said Tori. “The stimulating environment at Meredith uncovered my enthusiasm for bettering health outcomes for all people through advocacy and education of healthy behaviors.”

As a public health major, Tori interned with the health center on campus, where she planned wellness-related events for students. “It has been a pleasure working alongside Dr. Mary Johnson, director of health services, and seeing her passion for improving the health of campus,” said Tori.

Along with her internship, Tori serves as a Wings and transfer student adviser and was president of Alpha Lambda Delta Honor Society (ALD) during the 2016-17 academic year. Being a part of ALD provided one of her biggest challenges but also one of her greatest accomplishments.

“I decided to apply for a national scholarship through my honor society that no other student at Meredith had ever received,” said Tori. “In the scholarship application, I outlined my contributions to the honor society, incorporating the advice given to me by faculty and staff.”

“The people of Costa Rica, known as Ticos, were welcoming and friendly, and the country itself was colorful and vibrant,” said Tori. “Learning about another culture was an incredible experience that I am blessed to have had. The trip was great because I was able to better my Spanish language skills, form relationships, and explore a new country all at the same time.”

Tori has spent just three years at Meredith. She graduated from high school in 2014 and decided to take a gap year. She worked full-time as a pharmacy technician with the plan of enrolling in Meredith in 2015. When she enrolled, she claimed the Class of 2019 and competed for them in all of the traditions.

“During my second year I met with an academic adviser who told me that I could graduate a year early,” said Tori. “Because of college credit accumulated in high school combined with the summer that I spent studying abroad in Costa Rica, I had enough credits to graduate in 2018. Somehow, the year I had taken off of school was given back to me.”

After graduation Tori will be attending East Carolina University to pursue a Master of Public Health with the goal of working as a director of health services where she can ensure that patients receive quality care in an effective manner.

“Meredith prepared me for graduate school by teaching me my strengths, giving me an opportunity to participate in research, and providing an environment in which I could build relationships with professors,” said Tori. “Students at Meredith are going strong, and as one of them, I am heading to my next journey with a greater pride in young women after seeing all that we have accomplished so far.”

Learn more about the study abroad programs at Meredith