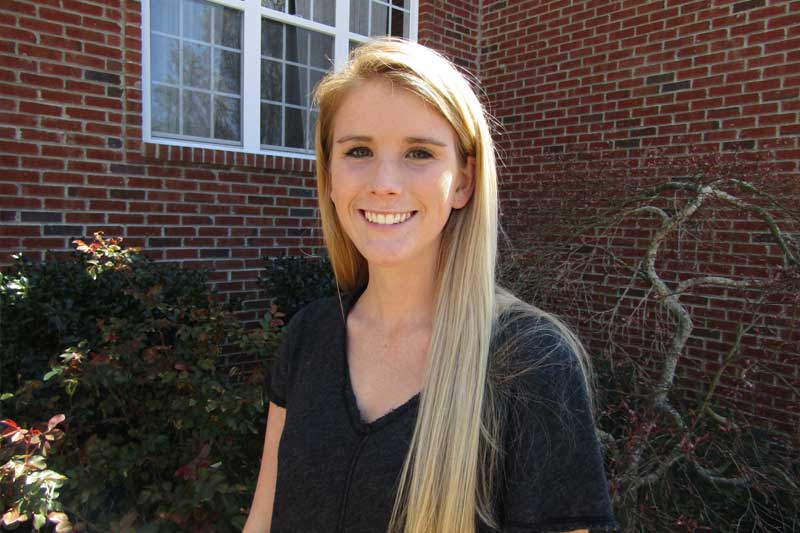 While playing soccer, she was selected for the USA South All-Tournament Team in 2017, earned USA South All-Academic Team honors three times, and her team has been USA South Conference Regular Season champions for four consecutive seasons. Samantha says some of her favorite memories have come from the soccer field.

“Sophomore year we were playing an undefeated team in the conference. The game was tied, and I scored the game-winning goal,” she said. “That was such a fun experience.”

Being part of the soccer team provided a helpful outlet for Samantha during stressful times.

“The team was like a second family,” Samantha said. “They gave me an escape if I was frustrated or if I didn’t do well on an assignment or something. I could go to practice and forget about it.”

Although being a student-athlete is challenging, it has helped Samantha become a better student.

“It’s hard to balance a social life, soccer, and academics, but being on the soccer team forced me into a schedule and made me study,” she said. “It really helped me learn to manage my time.”

Samantha was a member of Meredith’s Student Athlete Advisory Committee (SAAC) for three years, where she served two years as SAAC treasurer. She has made the Dean’s List and has been recognized each year by Meredith’s athletics program for maintaining a grade point average above 3.0 during soccer seasons.

In the classroom, Samantha was able to find her passions with the help of Meredith’s faculty and small class sizes. By talking with her adviser and professors, she decided to major in biology and minor in Spanish and psychology.

“In Spanish and psychology, I was mainly taking the classes because I liked them, and the professors made the classes enjoyable,” Samantha said. “Those first professors I had four years ago still know me by name, and that has really helped me. When you need help they’re always there. That motivated me to be a better student.”

During the summer of 2016, Samantha studied abroad in Spain. She was initially afraid to go, but studying abroad brought her new experiences and opportunities to expand her knowledge of Spanish.

“Study abroad was definitely the best thing I did during my time here,” Samantha said. “It challenged me, but I learned a lot about myself. I felt so much more independent after that experience. I did things I never thought I would do, like stay with a family who doesn’t speak any English. I want to go back so badly.”

Samantha is now working as a certified nursing assistant in home health care to gain experience before applying to physician assistant schools. She is confident about her application process, saying Meredith has prepared her for her next step and will remain available to her in the future.

“I have a better idea of who I am now than when I first came to Meredith,” Samantha said. “I have everything I need, and if I ever need any help I can still talk to any of the professors here.”