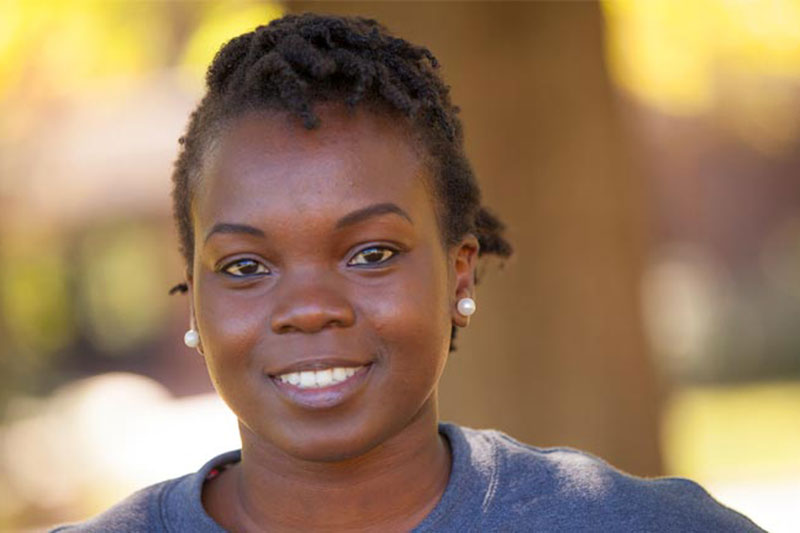 When Rodda Ouma arrived at RDU International Airport to begin her Meredith education she didn't know what to expect, but she was determined to take advantage of every opportunity.

In the summer of her freshman year, Rodda worked with a faculty member to research interactions between the zinc ion and the beta amyloid peptide, which are thought to cause Alzheimer’s disease. She completed internships at Metabolon, Inc., a leading biochemical diagnostics firm in Research Triangle Park, first as an analytical laboratory intern and then in project management.

“Having two internships has helped my resume stand out,” Rodda said. “Through that experience I’ve been able to apply what I learned in the classroom to real life biotechnology applications.”

Rodda served in leadership roles on campus, including as Meredith International Association vice president and a student adviser. She completed nearly all Meredith's leadership programs, and volunteered with the Sister Cities Association of Raleigh.

Her Meredith education was well-rounded. While earning a Bachelor of Science in chemistry with a minor in mathematics, she also took courses in a variety of disciplines.

“Meredith College provides the opportunity to take classes from various departments outside your major which builds an integrated skill set,” Rodda said. “I have been able to take computer programming, public speaking, statistics, and research classes. Taking sociology and religion classes have expanded my way of thinking because the classes encourage you to see the world through a different lens.”

After working for a few years, Rodda plans to go to graduate school. No doubt she will succeed, thanks to the preparation provided at Meredith.

“Meredith College has encouraged me to think differently, and to get involved and engaged in leadership activities, which have prepared me for the next step in my life. If I could do it over again, I'd choose Meredith.”