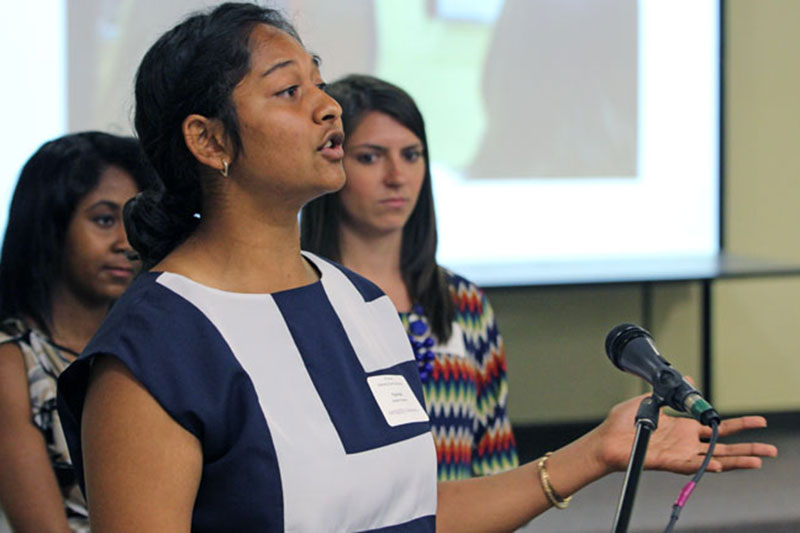 Puja Patel,’14, came to Meredith to play tennis. A highly-competitive player, she was injured her senior year in high school and looked for a school with a strong Division III program where she could continue to pursue her sport.

She had no idea that Meredith’s outstanding psychology and undergraduate research programs would define her college career – and culminate in her receiving the outstanding student in research award.

Puja took a class on psychology and culture, which led her to begin exploring bicultural efficacy. Once she caught the research bug, she was hooked.

Her passion for research led her to study biculturalism in depth. Her interest was fed by her own experiences of living in India for 10 years and then moving back to the United States when she was 17.

“My parents wanted me to know where I come from,” said Puja. “When I moved to India, it was a huge change. But then I became accustomed to a whole different culture, so I experienced culture shock all over again when I moved back.”

During her college career, Puja completed two internships with a clinical psychologist in India. She wondered if the Indian patients she observed might be failing to receive the full benefits of their psychological treatment, which has its roots in western culture. This observation, too, fed her research.

Puja continued to play tennis throughout her time at Meredith, proud to represent her college as an athlete. And she represented Meredith at state, regional, and national research conferences too, sharing her findings on bicultural self-efficacy.

What’s next for Puja? She plans to work as a database analyst to gain some additional experience before attending graduate school. Ultimately she wants to develop culturally-sensitive psychological treatment options.

“Culture is becoming so fluid,” said Puja. “Psychology understands that we’re different, but the treatment that’s available now doesn’t address that.” This strong student has big plans to fill that gap.