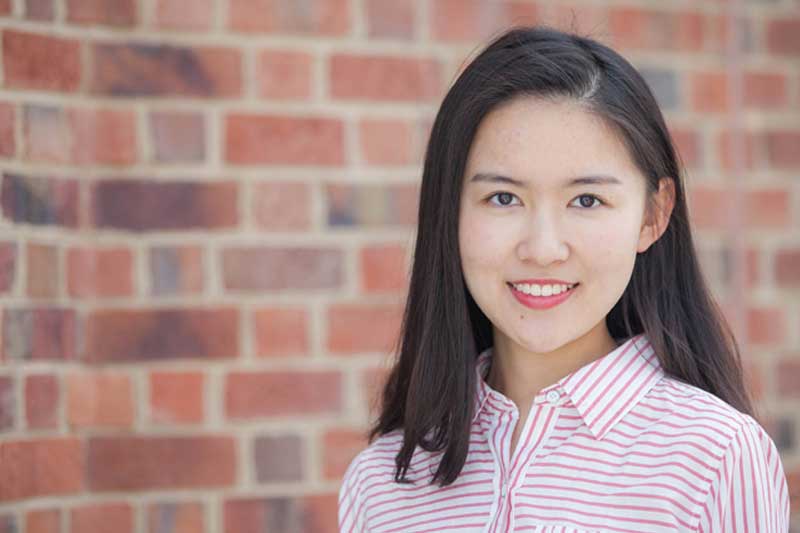 From an early age, Olivia Pan knew she wanted to be a dentist, which is why she earned a bachelor’s degree in biochemistry from Imperial College London before moving to the U.S. to pursue her dream.

Olivia, a huge Harry Potter fan, decided at the age of 14 that she wanted to move to England and continue her studies abroad. Leaving her family behind in China, Olivia enrolled at Oxford School of English with limited English-speaking abilities. While attending school, she lived with a host family. It was through her host mother where her passion for dentistry was discovered.

“I was inspired by my host mother in England when I was in middle school,” said Olivia. “My limited English made it difficult to make friends. My host mother was a dentist and would take me to her dental office often to help out. It was there I witnessed how dentistry has changed people’s lives.”

After spending the majority of her teenage years in London, she moved to North Carolina to join her parents, who had migrated to the United States, and to pursue her dream of going to dental school in the U.S. With an undergraduate grade point average (GPA) lower than most applicants, no dental programs would accept her. So, she looked for post-baccalaureate programs in the area.

Olivia knew that the transition from the British education system to the U.S was going to bring challenges, but Meredith College helped her every step of the way. She enrolled in the Pre-Health Post-Baccalaureate Certificate Program where she learned how to take the DAT, how to tackle interviews, and how to write personal statements. She was also able to connect with other pre-dental alumni.

“All the instructors at Meredith were extremely helpful,” said Olivia. “They guided me through my transition period. By interacting with other pre-health students I was able to gain many experiences in how to study efficiently and how to find shadowing opportunities. Everyone was very encouraging.”

Being a part of Meredith’s Pre-Health Post-Baccalaureate Certificate Program gave Olivia the encouragement and attention she needed to prepare for success at a top-notch dental school. She completed the program in 2016 with a perfect 4.0 GPA and was accepted into seven dental programs, leaving her with the tough decision of where to attend school in the fall of 2017.

“My 4.0 GPA from Meredith was one of the most important deciding factors in me being accepted to any school of my choice,” said Olivia. “Without the help of the Pre-Health Post-Baccalaureate Program faculty and staff, none of the schools would have been impressed with me.”

In August 2017, Olivia will be attending UNC School of Dentistry. After dental school, she plans to work as an associate in a local dental office so that she can gain enough experience to eventually fulfill her dream of opening her own dental practice, where she plans to serve the low-income community.

“Without the education and the help that I received from Meredith, it would have been impossible for me to be accepted to any school,” said Olivia. “Being accepted into seven dental schools means Meredith was a successful and life-changing program for me.”