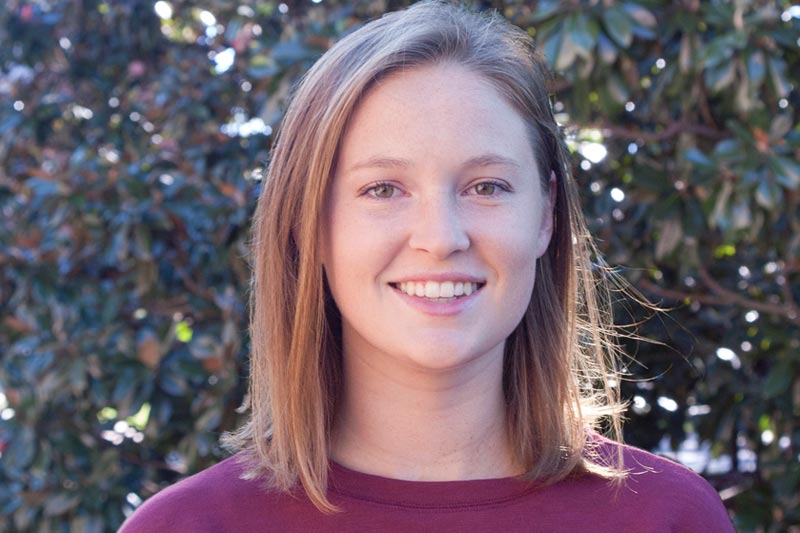 Artist. Scholar. Athlete. These are some of the many titles that Meredith Wyatt, ’19, has accumulated while at Meredith College. As an art education major, Meredith is treasurer of Kappa Pi International Art Honors Society, a member of Artists’ Alliance, and an athlete on the College’s cross country and track and field teams. She is also an Honors Scholar.

She credits these clubs and activities, as well as her relationship with faculty, with enriching her experience at Meredith College while also providing her with a support system and resources.

“The close relationship that I have with Professor [Emily] Howard and spending time with Dr. [Beth] Mulvaney have definitely helped me get to know the faculty more,” said Meredith. “They give me support and point out things that I could have done better.”

Meredith also credits her cross country/track and field coach for helping her land a summer job in art education. “My job was as a camp counselor at the Art4Fun camp through the Pullen Art Center,” Meredith said. “I worked with a team of counselors and a director to plan and implement activities for the kids that fit into a different theme each week.”

College comes with joys and challenges that help students grow as individuals. Hailing from Butner, N.C., Meredith struggled to gain independence and her voice for a time, especially while studying abroad in Italy during her freshman year.

“Study abroad challenged me because here at Meredith my parents are 45 minutes away and I always have them nearby,” said Meredith. “I had resources while studying abroad, but I didn’t have that closeness to know that they’re just right there.”

Meredith became immersed in Italian culture for a semester. She took Italy-specific courses and traveled to several European cities and countries. She was even given the opportunity to help in a preschool and second grade classes as part of her Italy Today class.

Her experiences on and off the Meredith campus allowed her to overcome those challenges. Meredith learned she could be independent and that she could speak up for herself.

“Even before student teaching, Meredith College had already given me experience,” said Meredith. “In my Methods class with Professor Howard, we taught lessons to kids at the Boys and Girls Club and to a homeschool group. From sophomore year, the education department puts you in a class to observe professors and their response to things that occur in the classroom.”

She is working toward her goal of becoming an elementary school art teacher. Following graduation, she will work at an art-focused camp offered through Raleigh’s department of Parks, Recreation, and Cultural Resources.

Meredith not only compliments the college for its academics, but for the environment of support among students.

“I chose Meredith because it was small and a women’s college,” said Meredith. “As women, we experience many of the same dilemmas and I feel that helps us come together. There’s always someone to offer a different solution to the same problem.”