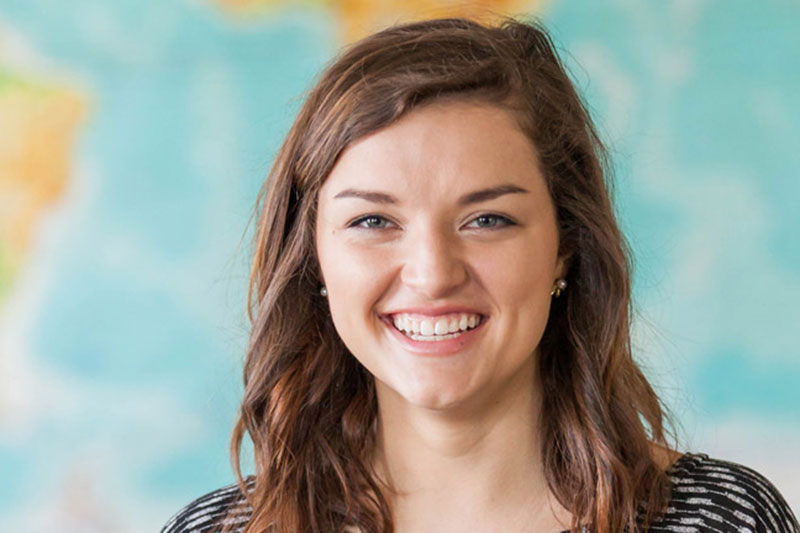 Studying abroad is often described by college students as a life-changing experience. For Meredith Hovis, ’16, the time she spent in Costa Rica was truly transformative. It helped her to discover a love of research, master the Spanish language, and prepare for the next phase of her education: a graduate program in environmental policy at NC State.

A double major in Spanish and environmental sustainability, Meredith had always been open-minded and loved meeting new people. She originally planned to pursue Spanish as a minor, and when she decided to study abroad, she intended to go to an American university where her classes would be in English. But her Spanish professors encouraged her to push herself, so instead she attended Universidad Nacional de Costa Rica where she was the only English-speaking student in her classes.

“That’s where I really learned to speak Spanish. I didn’t want to talk, and I was scared people would make fun of me. And my professors didn’t go easy on me – they called on me in class and asked for my perspective being from a different country.”

Soon Meredith found herself thriving. When her semester was over, she wasn’t ready to leave Costa Rica. So she applied for a competitive summer research position – and was one of only four U.S. students selected. She spent the summer studying leaf cutter ants and doing research in the rain forest as part of a diverse team of students and faculty. When she returned to Meredith, she wanted to use the skills and knowledge she had developed in Costa Rica, so she worked with faculty to research carbon in the soil found in the forest on campus and in the nearby Prairie Ridge Eco Station. She also advocated for the environment - and had several letters to the editor published in regional newspapers.

Complicating Meredith’s decision to attend graduate school were two job offers in her field. One, as resident naturalist in a cloud forest in Costa Rica, tugged at her desire to remain in a country she’s come to view as a second home. The second was the result of an internship she held with Environment North Carolina – and in that case she compromised by agreeing to work as a canvasing director for three months before entering her graduate program in the Fall.

For this strong student, her Meredith experiences have added up to huge gains in confidence – and a clear sense of what she wants for her future.

“I realize now what I’m capable of. Before I studied abroad, I needed more confirmation from others, and I wasn’t sure what I wanted to do after graduation,” said Meredith. “But the challenges are what have made me stronger and more independent.”