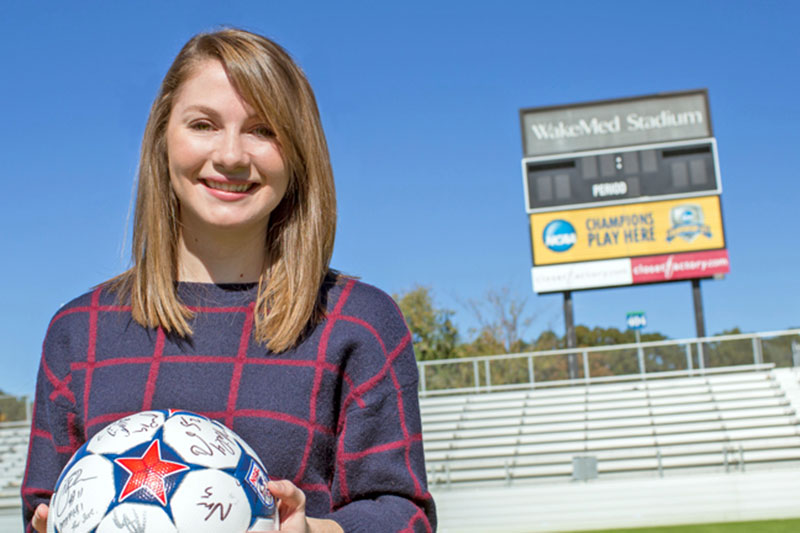 Maitlyn Healy, '14, is a woman on a mission. After graduating from Meredith in three years, she earned her Master’s degree in Sports Industry Management from Georgetown University. Since then she has worked as manager of fan development for the Raleigh-based professional soccer team Carolina RailHawks, and now serves as executive director for Leveling the Playing Field, a nonprofit that gives underprivileged children the opportunity to enjoy the mental and physical benefits of youth sports participation.

In spite of her considerable accomplishments as a young alumna, the path to her current position has hardly been direct: while at Meredith she changed her major several times. She counted on support from faculty and staff to keep her moving forward while trying on majors that ranged from English to interior design to history.

Even after declaring English as her major, Maitlyn continued exploring other interests –  and adding to her resume. She conducted research on the history of slavery in the North Carolina area. Served as staff writer and Sports and Entertainment editor for Meredith’s student newspaper, The Herald. She was both residence hall president her freshman year and a resident assistant her sophomore and junior/senior years. She also was a communications and PR intern for the RailHawks.

Maitlyn’s undergraduate education prepared her well for her graduate program because of Meredith’s focus on writing and critical thinking. And while her impressive organizational and time management skills were essential during her time at Meredith, they also came into play in graduate school. While at Georgetown, she worked with the Washington Redskins, interned with Most Valuable Kids (a non-profit that sends underprivileged children to sporting events), and volunteered on the White House lawn at the Easter Egg Roll alongside current NFL and MLS players.

According to Maitlyn, her dream job has changed several times since she started her undergraduate career. She has landed on wanting to work in community relations for a team or league while giving back to her community.

“Meredith prepared me for success as a young professional because of the confidence I gained as a woman during my three years on campus. I was given every opportunity as a student and ran with it.”

Learn more about majoring in English