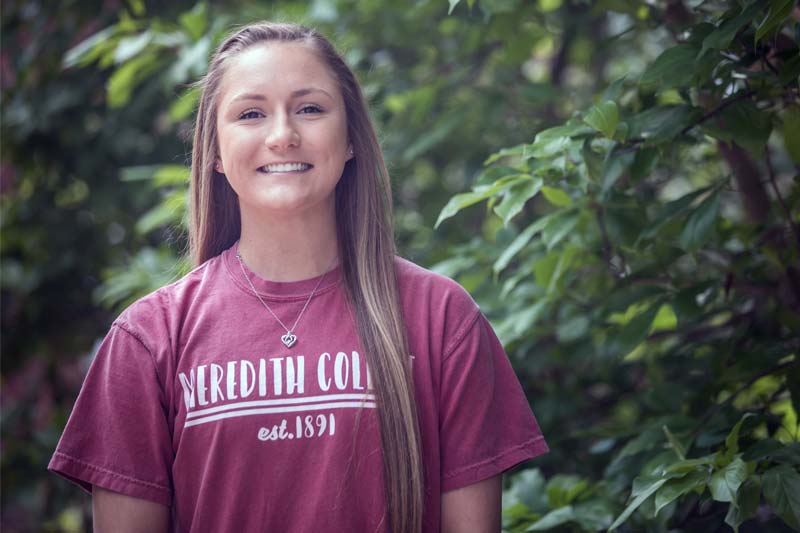 It’s a story we’ve all heard before: small class sizes, supportive professors, the opportunity to play collegiate sports - these were all the things that attracted Madison (Madi) Hamilton, ’21, to Meredith College.

And the College has definitely lived up to its promises, in Madi’s experience.

But there have been a few unique perks as well. Like having a softball coach who cared so deeply about her academic success that she set up a meeting with the head of the Nutrition Department during Madi’s first visit on campus. And having professors so invested in her professional development that they advocated on her behalf to be accepted into prestigious programs.

For example, Michael Altman, the head of the hospitality management program, has assisted Madi in finding internship opportunities, and was a driving force behind her getting involved in the Broyhill Business Fellows. “He had confidence in me and advocated for my acceptance into the program,” she said.

As one of the first students to major in hospitality management at Meredith, Madi has accomplished many things during her time here, both on the softball field and in the classroom. And she did so while facing a challenge many college students don’t: living 11 hours away from her home in Panama City Beach, Florida.

But with the help of her coaches, team, and professors, Madi was able to face that challenge head on. “Because Meredith is a tight-knit community full of faculty who truly care about the students, I have been able to flourish,” she said.

A few of Madi’s achievements include being named an All-Sportsmanship, All-Academic, and All-American scholar athlete. She was also named a co-captain of the softball team. “It was a huge honor for my team and coaches to see leadership qualities in me,” she said.

Being a student-athlete also presents a unique set of challenges, but Madi said she wouldn’t trade the experience for the world. “I have learned time management skills that would make your head spin,” she said. “I pride myself on being an incredibly independent, responsible person, but participating in sports while in college has magnified those traits tremendously.”

After college, Madi isn’t quite sure what she wants to do yet; though she dreams of someday owning a restaurant or bakery. With a double major in hospitality management and nutrition and a minor in entrepreneurship, she’ll be well prepared to take on that challenge.