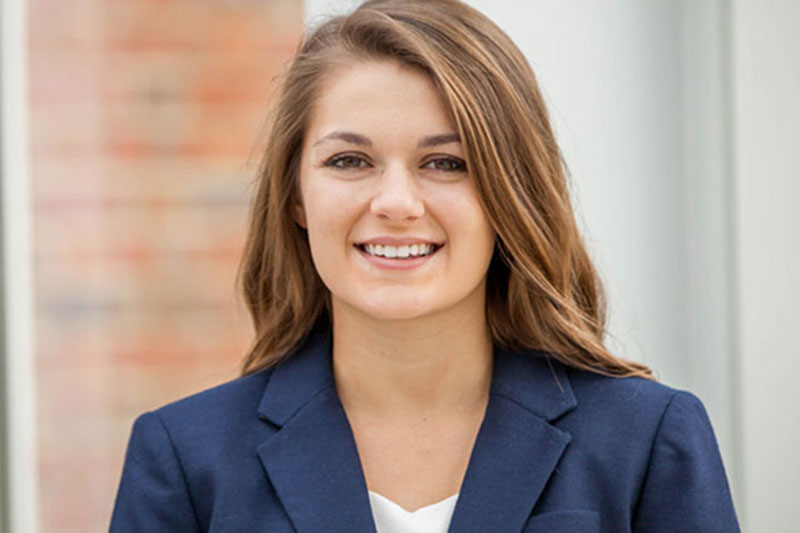 In her four years at Meredith College, Lacey Hambridge, ’16, has worked to educate school-age children, provide shoes for children in need, and combat hunger by educating others.

A food and nutrition major with a minor in biology, Lacey has participated in grant-winning studies and conducted promising undergraduate research toward the fight against hunger. An intern at Stop Hunger Now®, Lacey recently completed a project assessing the BMI of 200 children in Haiti who previously received meals from the organization. The research Lacey presented allowed the organization to receive an additional grant for nutritional support for children in Haiti.

Lacey’s drive to make a difference in the world started in high school when she founded Project Footnotes, through which people in her community decorated and donated canvas shoes for children in need around the world. Lacey’s initiative provided 200 pairs of shoes to children in Haiti and earned her the Girl Scout Gold Award.

Extending her movement to Meredith, Lacey asked incoming freshmen to decorate shoes for Project Footnotes as their freshman service project in 2014. Lacey’s proposal was a huge hit, and all the shoes collected were given to children in Belize during the Meredith Service Trip Abroad in the summer of 2015. While in Belize, Lacey was able to teach art, science, and reading in an elementary school, as well as teach public health and Project Footnotes to teenage girls at the Youth Enhancement Services (YES) home for women there.

During Lacey’s sophomore year at Meredith, she served in a program called Campus Kitchens, through which food donated from grocery stores is collected, cooked, and served to children at an after-school program in a low-income community. As a nutrition educator, Lacey provided children with important lessons that would impact their health in the future.

After graduation, she plans to work for a nonprofit organization and take steps to pursue her Registered Dietitian license.

A Presidential Scholar, cross-country athlete, and member of the Bathtub Ring, Lacey describes her Meredith experience in one word: “unforgettable.”

“Meredith feels a lot like family. The faculty and staff really share their lives with their students. One of my professors spent a whole day telling us about his research in Africa, sharing pictures and experiences. This was an unforgettable day for me because I was really inspired to achieve something great.”