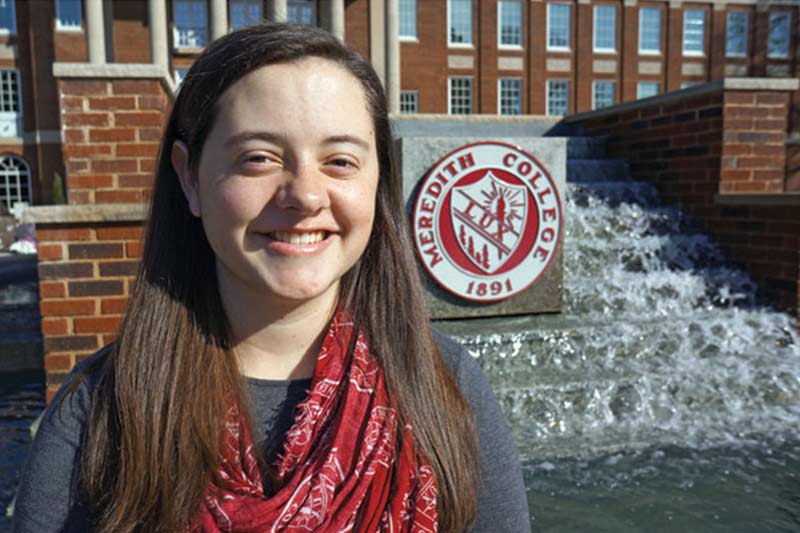 Emily Kelleher, ’17, knew she wanted to be successful in the future and find a career where she could help people, but she did not have an exact plan when she arrived on Meredith’s campus as a freshman.

Not everyone comes to college with a detailed plan for their future, and Emily expected that her plan would change. A personal quote that she has lived by is “Have an idea beforehand, but know that your first idea is not your last idea.”

Like many Meredith students, Emily has found support in developing her long-term plan through the general education program, campus organizations, and StrongPoints. “I have been opened up to opportunities I would not have known about such as careers and majors, along with my own potential,” said Emily.

“It sounded like something I would be really interested in. The class was about learning how people interact and communicate with one another and how to become a better communicator,” said Emily. “It showed me that this was something that I excelled in and had a real interest.”

Emily, who comes from Newport, N.C., has grown in many ways throughout her experience at Meredith. She is president of the Meredith Recreation Association, serves on the elections board for the Student Government Association, and is involved in the Honors program.

Aside from those roles, Emily enjoys being a part of Something from Home and the Orientation Crew. In Something from Home, she volunteers to organize small gifts for on-campus residents as a present from their families. With the Orientation Crew, she welcomes and helps new students on Move In Day. In all of these roles, Emily is able to exercise her interpersonal communication major and serve as a leader in ways where she can help her Meredith community.

“My positions and classes have served as an experience [for any career path in my future]. For me, this has allowed me to mature and gain skills that I would not have had my freshman or sophomore year,” said Emily.

Apart from the acceptance and unity that Meredith’s community displays, one of Emily’s favorite parts of Meredith is the personal touch the institution adds. “My professors at Meredith have been involved in my education and have helped to make sure I have been able to break out of my shell.”

After graduation, Emily plans to start a career in event planning, where she is excited about using her communication skills and being able to help people in the process.