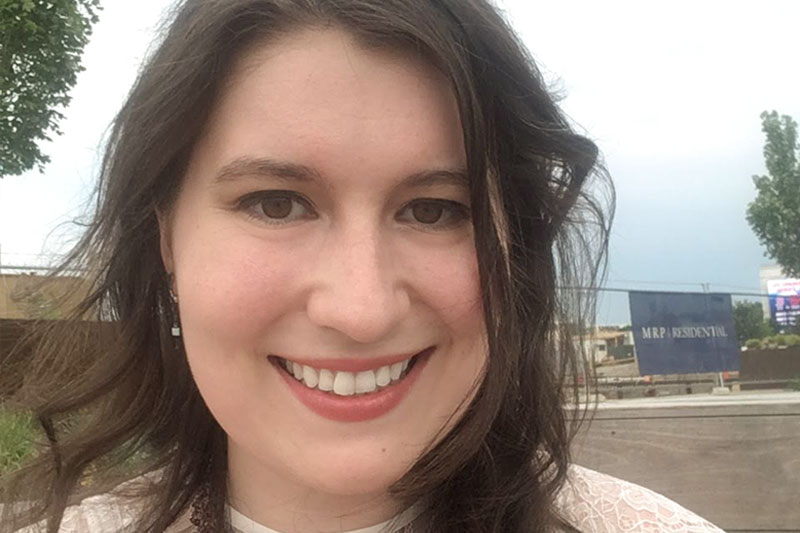 Emily Johnson, ’16, came to Meredith to earn a second bachelor’s degree in computer science after earning her first degree in psychology.

She now works as a software engineer, where she uses both her natural strengths and what she learned at Meredith on a daily basis. According to Emily, the way computer science was taught at Meredith influences her success in the field.

“The discussion-like atmosphere of my classes let me practice discussing the technical concepts I was learning, so that I would not only have the knowledge but be able to communicate about it effectively,” she said. “Similarly, my experience working with other students on tough schoolwork and in group projects directly maps to the interactions I have every day with members of my team at work. We were not merely told to work together, but were encouraged to learn from one another, find and leverage one another's skills, and cooperatively produce a unified end product.”

When Emily was first learning to write code, she explored various options in the Raleigh area that would help her develop and hone her coding knowledge and other technical skills. After weighing the pros and cons of different classes, boot camps, online courses, and programs at colleges and universities, she decided that the hands-on experience and academic rigor of a bachelor's degree program would be best.

“When I factored in the small class sizes and liberal arts curriculum, Meredith became the clear choice,” said Emily.

Because of the size of the computer science department, Emily was able to get to know her faculty well. She found that even during semesters when she wasn’t taking classes with them, her faculty remained actively interested in her academic career, internship, job prospects, and general experience at Meredith.

“This kind of support and personal interaction definitely helped me both feel like I belonged at Meredith and like a subject area that had previously been largely unknown to me could become navigable with the right guidance.”

Emily describes Meredith as practical and personal, with the small class sizes, hands-on learning, and conversational academic atmosphere being some of the most notable aspects of her experience.

“I felt personally known and supported, but I was also challenged academically. The work I did for class always fostered specific skills and never felt like busy work.”

While studying at Meredith, Emily interned at IBM. She found that what she was learning in class was directly applicable to the work she was doing at her internship, from knowledge of systems engineering concepts to Scrum team management methodology.

Today, as a software engineer, Emily writes code that analyzes and illustrates different types of data. Those skills, honed at Meredith, combined with her innate ability to connect with others, are serving her well.

“My communication skills, ability to function effectively in a team, and my adaptability in novel situations have served me best in my career. In a field like software engineering, where everyone hired on has at least a similar baseline level of technical knowledge, those "soft skills" can really give you an edge.”

Reflecting on the experience of earning a second degree, Emily said she learned to be a confident self-starter.

“Pursuing a second degree while working required that I carefully manage my time and focus, so I had to truly commit to my school work if I was going to be successful. I began to answer questions with self-assurance whenever I knew the answer, and to not be afraid to just-as-confidently ask for clarification if I didn't understand something,” she said. “I was also able to shed some elements of impostor syndrome as I both gained knowledge and was supported enough by my professors and peers to admit and be okay with what I didn't know.”