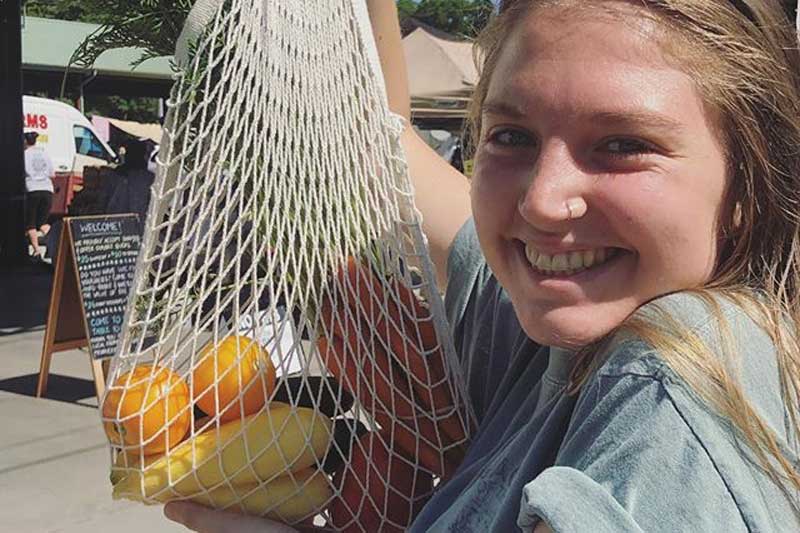 Religious and ethical studies major Ellie Jones, ’20, views learning as a lifelong experience – so it’s perfect that after graduation she will continue her studies at the University of Montana in Missoula, where she will pursue an M.A. in environmental philosophy with full funding and a teaching assistant position in the program.

Ellie had a variety of powerful experiences at Meredith, particularly studying abroad and conducting undergraduate research. Throughout her four years at Meredith, she sought out challenges because, as she puts it, “The unknown and uncomfortable are really great places to start learning.”

“I biked everywhere, lived in a kollegium (apartment) by myself, took challenging and invigorating classes that enhanced my critical thinking skills, studied Kierkegaard where he thought and wrote, drank so much wonderful coffee, and explored every day with truly wonderful people.”

Ellie completed three separately funded undergraduate research projects and presented at three conferences in addition to Meredith’s own Celebrating Student Achievement Day and Taste of Research. She also collaborated on a collection of essays on ethics and comedy with her research adviser, Steven Benko, professor of religious and ethical studies. Ellie did copyediting, organized drafts, revisions, and final proofs, as well as co-authored a chapter in the book.

“Those opportunities culminated to shape and mold my research, writing, and editing skills and my ability to communicate those ideas and concepts effectively,” said Ellie. “Dr. Benko challenged me to be a better student and learner and, ultimately, a better person.”

All of her research was informed by what she considers her greatest strength: her unwillingness to accept things at face value and her drive to critique ideas.

“I have learned to reject surface level truths and interrogate those truth claims and the ways they sought to shape my behaviors and identity,” she said. “My strength came from critical thinking skills developed by thinking against institutional ideals and discourses.”

Among other faculty and staff Ellie counts most influential are her academic adviser Shannon Grimes, professor and department head of religious and ethical studies; her work study supervisor Bianca Diaz, with whom she had numerous discussions about books and life; and Professor of English Garry Walton, with whom Ellie worked as a teaching assistant.

As she contemplated her graduation from Meredith, Ellie said for her, a women’s college provided a uniquely empowering experience.

“Where society tells women to suppress and conform to norms that align with current structures, ideologies, and practices, my women’s college education taught me to think critically about those frameworks, discourses, and all of their intersections,” she said. “Ultimately, attending a women’s college was an experience that I would not trade for any other kind of education.