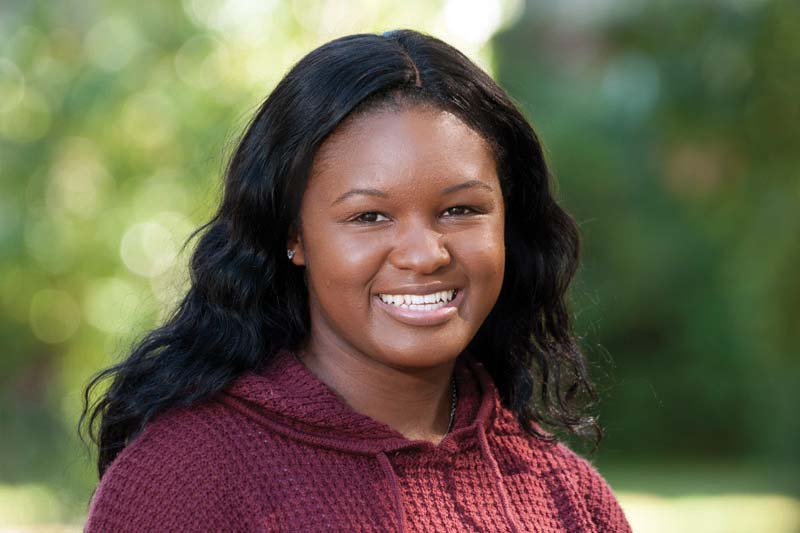 As the first in her family to attend college, Demonica Stanley, ’19, knows the value of an education. And she learned at a young age the importance of setting goals, chasing your dreams, and how not to let setbacks keep you from accomplishing them.

“I have learned that the sky’s the limit and if you really want something you have to chase after it.”

A member of the Meredith College Track and Field Team, Demonica had high hopes for her four-year collegiate career. Be an award-winning sprinter. Win a conference championship. Set Meredith records. But a serious injury during her freshman year turned those hopes into doubts. Or so she thought.

“I thought track was over for me,” said Demonica. “I continued to be a part of the team, but I couldn’t compete anymore. So, my coaches decided to turn my negative situation into a positive one.”

Not being able to run track anymore, her Meredith coaches turned her into a field event participant. Demonica learned how to throw the shotput, the javelin, and the discus. Now, she holds the school record in the javelin throw and is excelling in events that she never pictured herself doing.

“Even though for that moment in time, it may have seemed like the end of the world, it wasn’t,” said Demonica. “I may not be able to sprint competitively anymore, but I have learned that when life seems to be going in all the wrong directions, you have to stay strong and continue to fight through it.”

In addition to learning how to juggle classes, practice, work, track and field meets, and strength and conditioning sessions, Demonica has found time to get involved on campus. She has participated in Stunt and Cornhuskin’. As an exercise and sports science major, she is a member of the Sports Science Association and works in the Human Performance Lab where she conducts undergraduate research.

“The Meredith experience has enriched my educational performance, helped me meet new people, and created long lasting friendships,” said Demonica. “Being involved on campus has helped me to step out of my comfort zone, and overcome the shyness that I had when I arrived at Meredith my freshman year.”

As part of a track and field program that launched in spring 2016, Demonica has already made an impact. Her favorite memory is competing in the Atlantic Independent Championship in 2017.

Even though her track and field career took a slight shift in a different direction, Demonica remains focused on accomplishing her original goals. And she has learned just how strong a woman she is.

“I continue to fight through any struggle that comes my way in life,” said Demonica. “I prove to myself every day what I am capable of even when I have my doubts. You have to learn to be tough and make the best of every situation.”

Learn more about studying Exercise and sports science at Meredith