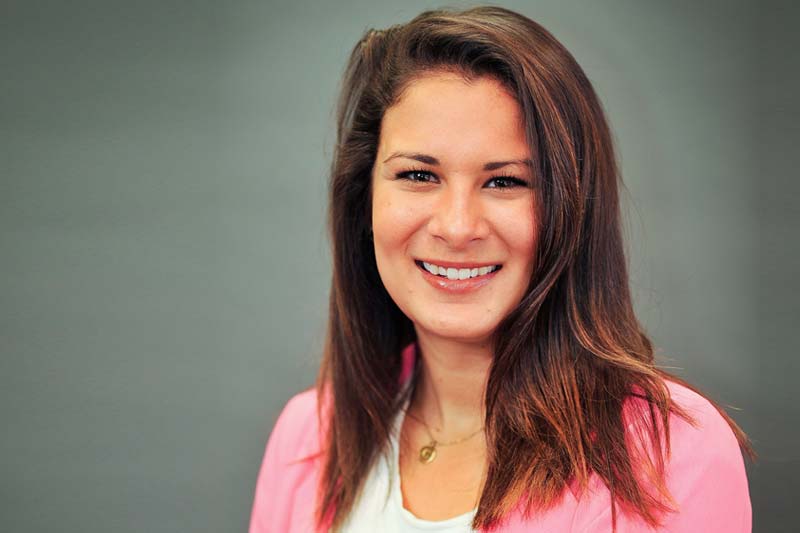 By studying abroad in London, landing a summer internship in Texas, and serving with multiple on-campus organizations, Cooper Rodriguez, ’18,  found her place at Meredith College.

While she didn’t originally plan on attending a women’s college, when Cooper stepped onto Meredith’s campus she felt like she had come home. “Everyone was so welcoming. There’s this bond that you make with other students here at Meredith that you won’t find anywhere else.”

As an exercise and sports science major, Cooper has always been active. While she planned to be a physical therapist, she found herself choosing a concentration in health and wellness. “As I got into the major, I learned about the body and how exercise impacts it. I loved seeing how it all works together,” Cooper said. “There’s a lot more science in the field than people think.”

Cooper has many academic achievements. She was one of eight students chosen nationally to take part in an undergraduate research program at Texas Tech University through the National Science Foundation. “It was a wonderful experience,” Cooper said. “I wanted to do something outside of my major so I went to Texas Tech and worked in their Human Factors Program, where I would run the study and test participants.”

She completed a senior research project that focused on the differences between internal and external cues in exercise, and she is also a member of Kappa Omicron Nu and Alpha Lambda Delta.

Her involvement with Meredith extends beyond the classroom. Cooper is a member of the Sports Science Association and the director of Angels in Motion (AIM). Her strength as an includer has been very helpful in this position as she manages free exercise classes for students. “I want to make sure that everyone feels welcome and that plays a part in how I approach my role in AIM.”

Cooper is also a student adviser and part of the White Iris Circle, giving campus tours and interacting with potential students. Her favorite part is participating in student panels and answering questions about life at Meredith.

Having the opportunity to study abroad in the summer of 2016 is one of the experiences Cooper remembers most fondly. “I met my best friends during my month in London. We all came from different majors and wouldn’t have been friends without this program,” she said.

She is grateful for the faculty and staff who have shown an interest in her success. “The whole department just wants us to get to where we want to be in our lives and they work so hard to help us get there.”

After graduating, Cooper plans to take a year off before applying to occupational therapy schools. “I’d like to work with veterans or children someday,” she said. “I love working with kids and want to help people.”