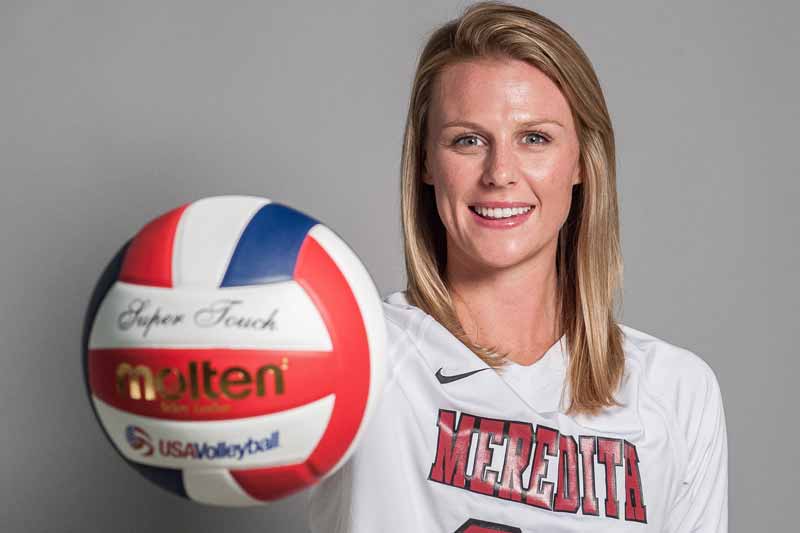 Volleyball co-captain Caroline Corey, ’20, said her involvement on the team has been key to her Meredith experience. Since she arrived on campus as a first-year student welcomed by “an instant group of friends,” volleyball has been a significant part of her college life.

“The memories we’ve made while traveling will be ones we cherish,” said Caroline. “The friendships I have made at Meredith are unlike any other. I am certain that once our time is done here, our friendships will still carry on.”

Those strong connections have no doubt contributed to the team’s success, with the Avenging Angels winning the conference championship the last two of the last three seasons and making two NCAA appearances.

Caroline also received individual conference awards each year, including Conference Rookie of the Year, AVCA DIII South Region Freshman of the year, as well as the 2018 Conference Player of the Year for the USA South Conference.

But Caroline said that while volleyball has been central, she quickly learned that there was much more to Meredith than sports. A business administration major with a concentration in human resource management, she has also been a student leader in the academic realm as a Broyhill Business Fellow and active member of the Phi Beta Lambda business organization.

“At Meredith, I have learned the value of leadership and the importance of stepping out of your comfort zone to become a leader,” she said. “The leadership qualities that I have learned while being a student will be important as I begin my career in business.”

She also learned valuable lessons about leadership off campus. For two summers, Caroline has held internships with The Nautical Group, a retained search firm in Raleigh.

“Through this internship, I have been able to build on several of my strengths. I have always been comfortable carrying on conversations with others, and this internship provided me many opportunities to talk to leaders within the Triangle area.”

She has further honed her communication skills in her studies and through interactions with faculty. Caroline said one of her favorite things about Meredith is the way the professors get to know their students.

“Professors show a genuine concern for their students and help us discover our strengths and overcome our weaknesses. Our relationships extend beyond the classroom and our professors serve as mentors.”

As a woman going into the business world, Caroline has seen great value in attending a women’s college, particularly the interpersonal connections that are formed.

“The benefit of an all-women’s classroom is hard to explain,” she said. “Conversations run so much deeper than in co-ed classrooms because students are encouraged to speak up and are not ashamed to express their opinions.”

That women’s college connection has another lasting benefit: alumnae support of students. Through her internship, she interacted with alumnae who are proud of Meredith and want to see students succeed.

“During my internship, I would meet with alumnae and their faces would light up when they discovered I was a Meredith student,” she said. “We shared a sense of community and sisterhood.”